Review: Both of Me by Amber Kelly (Cross My Heart #1) 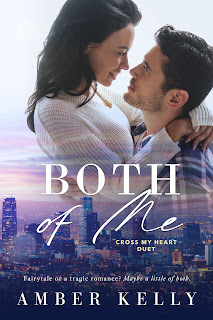 Both of Me is the first in the Cross My Heart duet by first-time author Amber Kelly. Told almost exclusively from the point of view of the main character but split between the voices Gabriella "Gabby" Mastreoni (aka the Cross slash New York period) and Brie Masters (aka the post-Cross slash Los Angeles period). "Cross" is Christoff Scutari, eight years Gabby's senior and best friend to one of her older brothers, Nicco, and he's nicknamed Cross because a much younger Gabby mispronounced "Christoff" into "Crisscross". The story spans several years, with past events being relayed by "Gabby" and those in the present by "Brie". Remember, this is the same person--the same main character--and to be honest, there isn't really anything overly distinct about either persona other than the names.

Gabby Mastreoni claims to have loved Cross Scutari since she was four years old, but for many years, he sees her as nothing more than his best friend's little sister. That all changes when she hits her teen years and Cross comes home from college and sees her in a whole new--aka more lustful slash romantic--light. But with the age difference and the close-knit ties between the Mastreoni and Scutari clans, Cross keeps his distance, and Gabby tries to come to terms with their being nothing more than friends until fate intervenes and throws the time of them together. Alas, their love becomes the ultimate sacrificial lamb when lives are taken and threatened, leading Gabby to leave New York for Los Angeles and becoming Brie Masters. Life goes on, but leaving her past behind isn't all that simple.

First things first: kudos to the author for following her dreams and putting proverbial pen to paper and sharing a story she's written with the world. I know how daunting the entire exercise can be, and Amber Kelly has certainly come up with an intriguing story line, enough that it piqued my curiosity. There was a fair amount of promise, and I had a lot of hope going in that the promise would be met, even if to just a degree. I liked the idea of Gabby loving Cross for as long as she did yet trying to move forward with her life each and every time she believed that love was either unrequited or was ill-fated. She and Cross do go on to have relationships with different people, and I think that this brings in an element of realism since I'm not exactly a fan of characters who pine needlessly throughout.

Inasmuch as I admired Kelly for the promise her story held, it did fall short for me. The whole back and forth between the past and present was okay, but it didn't really help in establishing any firm sort of connection between Gabby and Cross. There were fleeting moments of them but not enough that could convince me that what these two had was the sort of love that could transcend anything and anyone. Well, considering they went their respective merry ways more than once kind of proved that point. Then there was the whole thing regarding their families and a would-be stalker which should have heightened the tension but there wasn't enough of either one. The babysitting thing also seemed out of place. But the inkling of promise remains, so my fingers are crossed that the conclusion to this duet--whose release date I am not sure of--will bring "it". Three stars go to Both of Me. ♥

Purchase Both of Me on Amazon | Apple Books | B&N | Kobo.