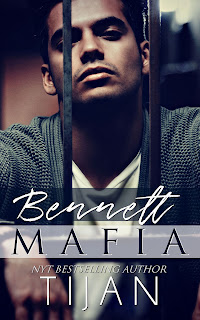 Note: An advanced reader copy (ARC) was provided by the author via Bocci PR.

Ooh! A new standalone from bestselling author Tijan to obsess over! I love her standalones because I'm one of those sad romance readers out there who have yet to read her Fallen Crest and BS books, although those are most certainly on my never-ending to-be-read list. With Bennett Mafia, we've got ourselves a romantic suspense read that's heavy on both the romance and the suspense and it's guaranteed to keep you on your toes from start to finish. And because this is a standalone, if you've never read anything by Tijan before, now's your chance to do so!

Riley Bello and Brooke Bennett became the unlikeliest of friends when they roomed together while enrolled at Hillcrest Academy. Riley hasn't seen Brooke since the curious death of her eldest brother and the passing of the Bennett patriarch just three months later, so she doesn't quite understand why Kai Bennett--Brooke's second eldest brother and the new head of the Bennett mafia--would think she had any idea where Brooke is fourteen years later. Brooke has gone missing, and Kai wants answers--answers he believes only Riley has. So he kidnaps her.

There was a lot to like about this book, but I confess that numero uno on that list was Kai Bennett himself. He was enigmatic and enticing. I struggled a bit with Riley, mainly due to her naivete more than anything else, but in due time, she become increasingly more interesting. Kai and Riley together made for a curious but compelling coupling and trying to find out what happened to Brooke made this even more enjoyable of a read. Tijan sucks you in with her mysterious blurb but that's just an inkling of what lays between the covers of Bennett Mafia. This gets 4.5 stars. ♥