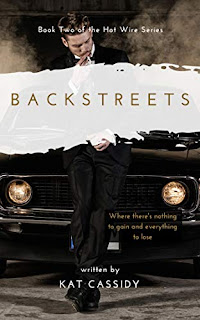 "You are a new, different Plan A." Nik cupped Peter's face in his hands. "One that is wonderful and full of many discoveries that I should be taking the time to appreciated as they come, not prying out of you before you are ready. I am sorry, Peter."


Well, well, well... That was... AMAZING! I seriously liked Night Moves, but Backstreets exceeded my expectations, which were already quite high to begin with, making me totally fall in love with the fast-paced story that unfolded in this second Hot Wire novel from Kat Cassidy. Taking place about a year after the events in book one, this second book finds Peter Bauer still trying to follow the straight and narrow path while continuing to pursue his relationship with single father and fellow mechanic Nikos Petrakis. But as much as he tries to not think about it, he misses the thrill he used to get while stealing cars. He also can't help but feel as if Nik has yet to fully move forward from the life he once led with his late wife. Then he crosses paths with his and Stavros Giannopoulos makes it clear how much he misses being with Peter, and soon, Nik's daughter is kidnapped. With a too long list of suspects and too little time, Peter is going to need dive back into the world he thought he had left behind, and that may mean having to come face to face with the man he hates with every fiber of his being: his vindictive and bully of a father. Take note: the three books in the Hot Wire series need to be read in order. None of these novels are standalones.

This book had romance, mystery, suspense, and action and a cast of characters that continue to intrigue the hell out of me. I'm far more emotionally invested in Peter and Nik's relationship in this sequel, but oddly enough, I'm quite curious about Stavros, who I don't necessarily consider a villain... Weird, I know, and it's highly possible that Kat Cassidy will prove me wrong on that in the third and final book in the series, but for now, I'm sticking to my guns. I loved how much Peter has developed as a main character, with far more layers than he had in the first book. He's still flawed and he's still got things to learn in life, but he's dealing with things coming his way in a more productive manner, and he realizes that he isn't alone. As much as Peter and Nik's relationship is at the forefront of this book, I also need to commend the author for making the female characters--three of whom were very much notable in my eyes--as kickass as they were, fiercely independent and not the type who will allow anyone to steamroller them. Fair warning to Kat Cassidy, though: Backstreets has set the bar high for the third book and I've got all my fingers and toes crossed that it knocks that bar to the side and surpasses it. This receives five-plus stars. ♥

Read my reviews for the Hot Wire series: