Review: At War with a Broken Heart by Dahlia Donovan 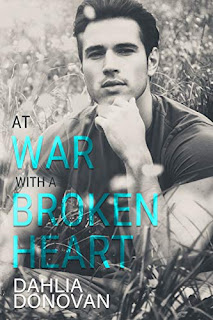 They decided not to tempt fate with either the pizza or Weetabix. Davet whipped up a large omelette with onions, cheese, and bacon. Sid managed the toast without burning it while Fie cleaned up their mess from the living room.

This is definitely the start of something wonderful.

I admit it: I've become a wee bit addicted to Dahlia Donovan's quirky brand of storytelling ever since I discovered her writing a little over a year ago. I think there are about six or seven books on her back list that I have yet to get to, but everything else that I have been able to read has ranged from me liking them or outright going all fangirl. When it comes to her newest standalone, however... Well, let's just say that if you're familiar with my reviews, you know how wary I can be when it comes to M/M/M stories or anything involving more than the "usual" two people in a relationship. No, I'm not talking about stories that involve cheating; I'm talking about three-sided relationships, and my wariness isn't limited to M/M/M--I don't care how the three characters identify. But yeah, I hesitate when it comes to these stories because I need to believe that all three are on equal footing in terms of their feelings for each other and the commitment they have to making their relationship work. Someone's always a bit more in love with one other person in the threesome, and then one's left out to some degree. So, did this book click with me?

Set in Bideford, a port town in Devon, England, At War with a Broken Heart is a story involving three men with very different personalities. Fie Morogh Russell is a forty-something former squad leader in the military turned mug maker who prefers the company of his service dog, Haggard, to humans. Twenty-something Davet Hause and his younger brother, Fraco, both of whom are on the autism spectrum, moved to Bideford a couple of years ago in order to get away from their abusive parents and now has his own coffee shop. Sidney Little went from being in the military--having served with Fie--to becoming an inspector with the local police, all while retaining his sunny disposition. When Davet is hit with the most devastating of losses, both Fie and Sid become his strongest and staunchest pillars of strength and support. There are very real ties that bond all three men together, but each of them have their respective issues and burdens to carry and with Fie and Sid being in their forties and Davet in his twenties plus unanswered questions regarding the life-shattering event, the odds seem to be stacked against them.

Dahlia Donovan managed to do what very few authors who've written stories centering on throuples have been able to do: she made me believe. Fie, Sid, and Davet seemed to have very little in common amongst themselves, but they honestly just fit together like the perfect pieces to a puzzle no one else has ever been able to figure out. I was rather teary-eyed at a couple of points in the story but there were also moments that I found myself grinning like an idiot. Again, I have Donovan's unique brand of creativity, quirkiness, and originality to thank for yet another unforgettable reading experience. There was no hesitation on my part when it came to becoming emotionally invested in each of these men as individuals and then later on as a throuple. There's some drama brought on by complicated and burdensome family ties on Sid's and Davet's end, but Fie's family reminds us that there are families that love their children and siblings and relatives without question. I'm giving bonus points to the animals in the story because, just like the humans, they were simply special. Five-plus stars for At War with a Broken Heart. ♥

Purchase At War with a Broken Heart on Amazon | Apple Books | B&N | Kobo.