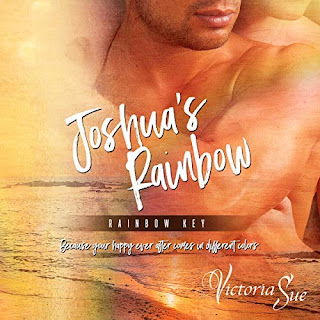 One of my good book friends has been on me to read AND listen to the Rainbow Key series, telling me how amazing the three currently available stories were, and after having read AND listened to (hooray for WhisperSync!) the first one, I've come to realize that she was right (but don't tell her I admitted that!). Joshua's Rainbow was a great introduction to the Rainbow Key series as well as to Victoria Sue's writing and Darcy Stark's narration, both of whom were new-to-me going into this. I am officially hooked, and as I'm writing this review, I'm currently listening to the second audiobook, Charlie's Rainbow (but more on that when I'm done and start working THAT review).

A health scare has forty-two-year-old property developer Daniel Morgan taking his best friend--who also happens to be his personal physician--up on his suggestion to take a long vacation, specifically at the Rainbow Key, a resort located at Paradise Island, both privately owned, in Florida. When he gets there, Daniel can't help but take note of the potential the place has once given a major influx of funding and undergoes renovations. It's managed by Joshua Dryden, and Daniel is immediately taken by the man twenty years his junior. After some hesitation, the two give in to their connection, but will either one want the other once their secrets are brought to light?

I'm a self-confessed angst addict, so I more than appreciated the amount of angst that this story had. I liked both Daniel and Josh, and that affection extends to the rest of the cast of characters on Rainbow Key, and I know that Charlie and Ben already have their stories out, but I'm hoping we'll be getting even more, especially one for Matt--after all there are seven "official" colors of the rainbow. Victoria Sue has created a memorable setting and a fabulous introduction to what already looks like an inspiring series, and Darcy Stark did a wondrous job bringing the story to life with his voice. I can't believe it's taken me THIS long to discover Sue and Stark. SMH. Time to remedy that grievous error in judgment! I'm giving Joshua's Rainbow 4.5 stars and can't wait for more from this series and S&S (yep, I've gone and nicknamed Sue and Stark!). ♥