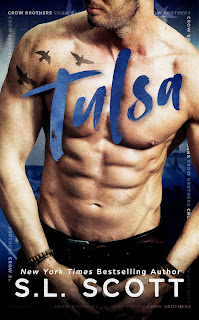 The second novel in S.L. Scott's Crow Brothers series is all about the youngest Crow, twenty-four-year-old Tulsa. He's known for pounding a steady beat with his drumsticks as much as he's known for a different and far dirtier kind of pounding. He doesn't apologize for his manwhore reputation nor does he do much of anything to dissuade it. He's used to getting any woman he wants, but when he meets twenty-three-year-old Nikki Faris, lead singer of Faris Wheel, he realizes that she's the kind of woman that requires more than a smile and a bit of flirting. The thing is, Nikki knows better than to even consider being with someone like Tulsa. He's a playboy who's already relishing the rock star reputation that hasn't even reached peak levels yet. But resisting Tulsa is proving to be futile because these two are drawn to one another in a way no one else has for either of them before. Is this nothing more than a fling that will result in Nikki being just another notch in Tulsa's bedpost or could this become a lasting love affair?

While Spark was an enjoyable read, Tulsa surpassed my expectations for it and turned out to be not only entertaining but the kind of rock star romance that stayed with me even after I was done reading. Tulsa was cocky, knowing full well just how attractive he was and how his being part of a rock band would bring him a constant stream of bedmates, but there was more to him than meets the eye. Having Nikki become a part of his life made it possible to see those parts of him that he kept hidden. The fact that they were also part of bands that were composed of their respective siblings made their story even more interesting, as did how much involvement those siblings had in their burgeoning relationship. S.L. Scott may be a "veteran" when it comes to this sub-genre, but she's given this second Crow Brothers enough original bits and pieces to allow it to stand on its own. She definitely kept me on my toes with a fantastically written romance with twists to leave me quite sated. Five stars go to Tulsa. ♥

Read my reviews for the Crow Brothers series: