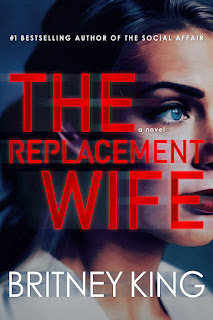 The Replacement Wife is the newest release penned by Britney King, and it is the companion novel to the author's prior release, The Social Affair, both stories involving the cult-like church and community of New Hope. While this new full-length novel can be read as a standalone, I'm going to go ahead and recommend that you read the previous New Hope-themed novel first to have more well-rounded idea of what New Hope is about. Tom Anderson was also introduced as a supporting character there, and he's one of the main characters here.

Tom Anderson may have lost his wife, but he wasn't the kind of man that was meant to live the rest of his life alone, not with him being part of New Hope. Finding the right woman wasn't as simple as him going out on random blind dates or joining an online date site or even using a dating app. Tom knew exactly what kind of woman would suit him and his life best, and he finally found her in Melanie. She's the perfect next Mrs. Anderson, but what Tom never prepared for was his new wife not being as perfect as he thought she would be.

If you're familiar with my reviews for Britney King's past books, all of which were romantic suspense reads, I try to keep them as spoiler-free as possible. The element of surprise is a near-necessary thing when it comes to this particular genre, so I can't really share much else in terms of what the book is about and the moments in which I was at the edge of my seat. You see, that's the thing with King's The Replacement Wife--she has you anticipating what happens to her characters, all the way to an ending that readers never see coming. Five stars. ♥

Read my reviews for the New Hope series:

The Social Affair (book one) - five-plus stars - My Review