Review: On the Ice by Amy Aislin (Stick Side #1) 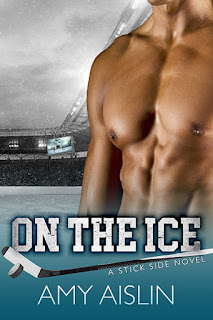 It's been a little over seven months since I first read my first Amy Aislin novella, save for one which I am now thoroughly regretting since it's where the main characters in this newest release of hers were originally introduced to readers, I've read all her other novellas. For 2018, she's finally got her first full-length novel published and it's easily become one of my favorite hockey romance reads in this first half of the year. On the Ice also happens to be the first in the author's new Stick Side series and it's already set the bar for all to follow.

Nineteen-year-old college sophomore Mitch Westlake is a young man with a plan. He's a gifted hockey player for his college team, but while he has hopes of being drafted in the future, he also has a back-up plan involving a career that makes use of his kinesiology degree just in case his hockey dreams fall through. Instead of getting some much needed advice from someone in the field during a panel discussion, however, the guest speaker Mitch is waiting for is replaced by an injured pro hockey player and famous Glen Hill College alumnus.

Two years in the pros and twenty-four-year-old Canadian native and Tampa player Alex Dean is sidelined by a broken arm. He heads to Vermont to spend time with his ailing grandfather and his closest friends while recuperating. But then a cocky college student and promising player comes on to him after a kinesiology panel discussion. Alex makes it clear to Mitch that he isn't interested in fooling around with him, but there's something about the guy that makes Alex want to crack through Mitch's facade and get to know the real him.

From the moment Mitch flirts with Alex and is summarily shot down, I found myself becoming invested in these two. They may have been both gay, but neither one was open about their sexuality, save for those who were nearest and dearest to them. Alex also happened to be a demisexual virgin, while Mitch was...well...not. I was curious to see how things would play out for both of them, not only as far as a potential relationship was concerned, but also when it came to their respective stories away from the sport that they both obviously loved.

Amy Aislin did a remarkable job with this book, not only because she's clearly shown she can go from the shorter form that is the novella to the more expanded one necessary for novels, but also because she's got a good balance of hockey and romance. She also highlights family in this series starter, as well as both Mitch and Alex having a firm support system that is composed with the family members that believed in them and the true friends who had their backs. I confess, my heart squeezed in empathy several times while reading this one.

My only quibbles regarding the book would have to be Alex driving with a broken arm since, well, I've witnessed firsthand how difficult a feat that is and Alex never giving an answer to Mitch's question from the panel discussion. Those were what prevented from giving On the Ice a five-plus-starred rating, but I don't necessarily think giving this "just" five stars is all that terrible either. I've got my fingers crossed that the rest of the Stick Side series will either follow suit or surpass my expectations going forward. Nicely done, Amy Aislin! ♥