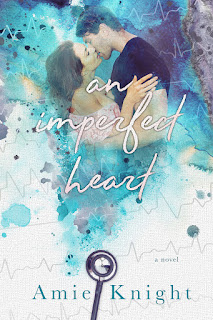 An Imperfect Heart is the newest book released by Amie Knight and it's a standalone second-chance romance loosely connect to two of Knight's other Heart books, See Through Heart and A Steel Heart. It's been a decade since Dr. Anthony Jackson last saw Kelly Potter and when he sees her again, not only is she very much pregnant, but her unborn child needs a doctor--Anthony in particular. He's one of the leading pediatric cardiac surgeons around, and the daughter that Kelly is carrying has been diagnosed with hypoplastic right heart syndrome. They may have shared something special ten years ago, but Kelly isn't looking for any sort of rekindling of their romance. All she wants is for Anthony to help her daughter. But as they join forces to help save Kelly's unborn baby, Anthony wonders if he'll succeed in righting all wrongs and healing both their hearts.

I've enjoyed Knight's books in the past and her latest one falls neatly into place with those that came before it. I liked Kelly and her mission to do anything and everything in order to make sure that her baby had a fighting chance to be born into the world. While becoming pregnant wasn't part of her plans at this point in her life, she hunkered down and not only accepted her circumstances but did what she had to. Now, as good a guy as Anthony was, he certainly made some major missteps that had me wishing he was an actual person so I could smack him a time or two. No, I wasn't expecting him to be perfect, but as nice as he was for most of the book, his reasons for doing what he did to her ten years ago were lame and I wished Kelly wasn't as quick as she was to forgive and forget. All things considered, An Imperfect Heart was a good, heartfelt read and it gets 4.5 stars. ♥

Purchase An Imperfect Heart on Amazon.