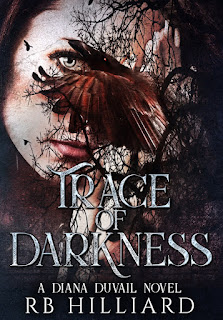 Note: An advance reader copy (ARC) was provided by the author via Enticing Journey Book Promotions.
Ah, I love it when an author whose work I've loved in the past decides to flex their creative muscles and take on a whole new trope. RB Hilliard is that author, and paranormal romance is the trope. Even better? Trace of Darkness is the first in a new series titled Diana Duvail. The titular character is a police officer with the Charleston Police Department who's known for tenacity while ensuring that she does everything by the book. But as impeccable as Diana's reputation may be on the job, she's keeping a secret--one that could put at risk everything she's worked for if it's ever revealed. All it takes is one instance while on patrol for her world to shift and her secret to be divulged. Now, Diana's been sent to CPD's paranormal department, and a spate of killings leads her to seek help from the Southern Vampire Organization. Diana works alongside Zacharias Wylde, but will the police officer and the Vampire Lord solve the case before it's too late?
Grab a few pillows and your favorite blanket and get comfortable because this series starter will demand your attention, and believe me, the time  you spend reading it will be totally worth it. There's romance, suspense, and action and it's wrapped in this dark and sensual vampyric atmosphere that just sucks you in. The chemistry between Diana and Zack was palpable, and I simply could not get enough of these two. RB Hilliard has shown that the risk she took by taking on a new genre was one that was worth taking. Trace of Darkness is addictive and had me entranced from start to finish, andit receives five stars.
Date Read: 07 October 2021
Learn more about RB Hilliard.
Purchase Trace of Darkness on Amazon.