Review: Pick Me by May Archer (Sunday Brothers #1) 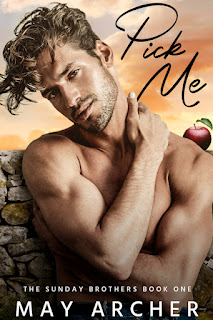 Note: An advance reader copy (ARC) was provided by the author.
From Whispering Key, May Archer takes readers to Little Pippin Hollow as she kicks off her new series, Sunday Brothers. Book one is Pick Me, and we've got the eldest among the Sunday siblings, thirty-nine-year-old Knox, and he's paired with a familiar "face" to Archer fans and readers--Gage Goodman. Yes, the same Gage from Archer's Whispering Key series. Twenty-four-year-old Gage has made the move from Florida to Vermont, and all the lumbersexual vibes are a bonus as he works with the Sundays at their family-owned orchard. He's there for the job experience--and to get away from his uber involved family. Involved as in they liked to get a tad too involved in his business. And Gage is loving the independence, the small town Hollow feels, and working with the Sundays. Well, maybe except one Sunday. He's been crushing hard on Knox since he caught a glimpse of the guy and his gorgeous smile in the family photo on the orchard's website. But Knox has made it clear he isn't the least bit interested in Gage. Or maybe he's a whole lot interested.
May Archer brought the heart and the humor in the new series starter of hers, and I was all for it. Talk about bringing a smile to my face and keeping it there for the duration of my read. Gage pushing Knox's buttons was priceless, and the banter between the two of them was entertainment galore. I liked how these two seemed like such opposites, but they found some common ground. Gage wanting some distance from his family to find his own way, and Knox needing to return home to be there for his own family brought them together, and it was fascinating to see them go from two people needling each other to being strong support systems to one another. An absolute bonus was getting glimpses of the Whispering Key crew and how they were still keeping tabs on Gage but not in an overbearing way. Okay, maybe just a tad. Hey, they care, and that's what matters! And the Sundays? Gah! These peeps were a hoot, and I can't wait for each of them to get their own happily-ever-afters. Pick Me was a truly great beginning to an already promising series. It gets 4.5 stars.
Release Date: 05 October 2021
Date Read: 04 October 2021
Learn more about May Archer.
Purchase Pick Me on Amazon.