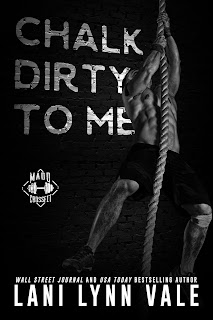 Note: An advance reader copy (ARC) was provided by the author via Uplifting Author Services.
I am absolutely MADD about all things Madd CrossFit. While I may not have the resilience to actually get into CrossFit (much to the disappointment of my youngest sister who remains the only human being I know personally who's done it), I'm totally into Lani Lynn Vale's series focused on a group of CrossFitters who belong to the Madd CrossFit gym. Chalk Dirty to Me is the third and latest release, and it's all about Cannel Crow and Wilhelm Schultz. She's a thirty-year-old survivor of an abduction that led to her being kept captive for a year with someone who treated her like she was a pet, and not a pampered one at that. When Cannel learns that her captor entered into a plea bargain, she's disheartened and feels victimized yet again. Then she meets Will. While the Paris, Texas police detective shifts her world, she opens his eyes to more than black and white.
Going into this book, I had no idea that Cannel's story began in Conjugal Visits, which is the second book in Lani Lynn Vale's Souls Chapel Revenants MC series. Not having read that, I confess that there were moments, particularly when characters from the aforementioned book appeared and I felt like I was missing something. That being said, I still absolutely enjoyed the heck out of Cannel and Will's love story. Cannel's back story broke my heart, but I bow before the woman's drive to push forward with her life and not allow her past to define her. Then there's Will who is super protective of Cannel, but he's also equally supportive of her, not wanting to make her feel helpless while reminding her that he's there for her. Bonus points for Cannel's brothers, who were pretty darn unforgettable. All in all, Chalk Dirty to Me was an inspiring, four-starred read.
-------------------------
Read my reviews for the Madd CrossFit series: