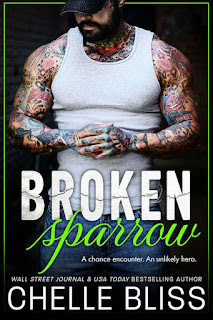 Note: An advance reader copy (ARC) was provided by the author via Valentine PR.
My first read from Chelle Bliss came by way of her contribution to the multi-author Salvation Society book universe, and now, my second read is a series starter, and I relished the opportunity to be able to read something from this author in a world that she created. Open Road is the series, and Broken Sparrow is the first book. This is about two people whose paths intersect, and it takes that one moment of connection to change both their lives going forward. It's got a hint of motorcycle club romance with a pinch of suspense, and a whole lot of romance and lighthearted banter with flirty and sexy times.
Alice Sparrow is a twenty-seven-year-old (or twenty-eight-year-old) mother to a five-year-old daughter named Zoey, and she's on the run from an abusive husband. She had a plan in place, but it falls apart when her car breaks down. The man who comes to her rescue is the tatted up stranger she met at the gas station just a short time prior. Dante Morris has never met a woman who's made him even consider something more than a romp in the sheets. At forty-five, his main priority is the motorcycle club he's the VP for, especially since they're transitioning into something more legit from who they used to be. Now, he wants more, but first, Morris needs to make sure his little bird and his princess are safe.
I quite enjoyed this series starter! I actually appreciated the relatively notable age gap, mainly because I've read quite a few in recent weeks where there is an age gap, but the difference in ages were usually rather underwhelming--think seven years or less. While not necessarily an insta-love story, things do progress rather quickly between Morris and Alice, what with the close proximity and all. I adored how Morris was with Zoey. Ovaries. Gone. BOOM! I'm giving Broken Sparrow 4.5 stars and so looking forward to the next one.
Release Date: 05 October 2021
Date Read: 02 October 2021
Learn more about Chelle Bliss.
Pre-order Broken Sparrow on Amazon | Apple Books | B&N | Kobo.