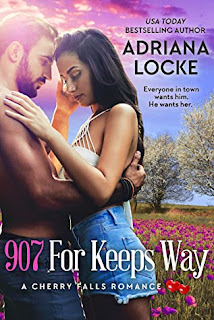 Note: An advance reader copy (ARC) was provided by the author.
907 For Keeps Way is Adriana Locke's second novella in the multi-author Cherry Falls series, and it's the thirty-sixth out of the announced fifty-two books. This is a standalone, so you can jump right, whether you're new to all things Cherry Falls or to the author's writing. This is Kaylee Richards and Dane McDaniels' story. She's a thirty-eight-year-old single mother to a fifteen-year-old daughter named Anna, and he's a thirty-five-year-old trainer who owns Cherry Falls Fitness. After her husband left her for a much younger woman, the divorcée decides the time has come for a change. She wants to feel like herself again--for herself and for her daughter--and what better way to do that than to get her workout on? Of course, she wasn't quite expecting such personal attention from the gym's owner--the same guy all the women in town have had their eye on for years. Dane has been single all that time and he's never seemed interested in any of the females around. But then, none of them were Kaylee, and she's had his attention for longer than she thinks.
Talk about a feel-good read! There was nothing that I didn't adore about this novella. While it may be a quick read, it certainly doesn't skimp in terms of character growth and story development. Kaylee is awesome--the kind of woman you want to cheer on and be friends with. I loved that she wanted to make a change post-divorce, not because her husband left her for someone younger, but because it was something she believed would be a step towards reclaiming the woman she once was. And Dane? Well, the guy was everything you could want in a book boyfriend. He was encouraging and downright devoted to Kaylee. Now, for the record, this wasn't a case of insta-love, especially on his end. You'll have to read the novella to understand why I say that. And yes, this is me highly recommending this gem of a read. It honestly the perfect pick-me-up after one stressful thing after another. If I had to nitpick, my only quibble would have to be the cover because the female model looks more like she needs an extra fifty pounds rather than lose it. But hey, don't judge a book by its cover and all that jazz, right? Here's hoping you fall for 907 For Keeps Way like I did. This gets five stars.
Release Date: 04 October 2021
Date Read: 01 October 2021
Learn more about Adriana Locke.
Purchase 907 For Keeps Way on Amazon.