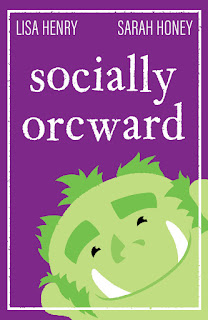 "I don't even know if there's a name for what we are. We're boyfriends, and we're in love, but without the other...stuff. Is there a word for that, I wonder?"

Dave brightened, because he might not be great with words or numbers or spelling, but, just this once, he knew the answer. "Yup," he said firmly. "There is."

"Happy. That's the word for what we are. We're happy."

The Adventures in Aguillo series is the best kind of addiction! Lisa Henry and Sarah Honey have created fantastical fiction that I can't get enough of, and if I thought the first two novels, Red Heir and Elf Defence, were amazing, well, third time's the charm, and by that, I mean I was wonderfully charmed by Socially Orcward. This is Dave's story, and if you've been following the series, then you'll recall that Dave is an orc who always has Pie, an epically scene-stealer of a finger dragon, somewhere on his person...or erm, his orc...ness. He doesn't need a whole lot in life to make him happy; he's got his friends and his beloved dragons. What more could an orc ask for?! Well, he certainly wouldn't mind having someone to share his life with--someone he could call his own. Maybe that could be Simon Perrin, the new kitchen hand, since he seems to love dragons as much as Dave does. It also looks like he likes Dave and all his orcliness. Or is Simon too good to be real?
I don't even know if I can sufficiently put into words how wondrous this book is! On creativity and originality alone, Lisa Henry and Sarah Honey are beyond measure, but there's no denying how seamlessly their storytelling was when it came to Dave and Simon's story. I appreciated how they dealt with asexuality here, and how those who mattered most to Dave accepted this part of him and loved him simply because he was Dave. I mean, come on, who the heck wouldn't love Dave?! And Simon was just the perfect partner for him, and it was a joy getting to know him and seeing how he gelled with the world's most lovable orc. And the dragons! Just like the noteworthy dogs, cats, and other animals in other books that I have fallen in love with, these dragons--from the OG, aka Pie, to the newbies--these scaly and somewhat feathery thunder of dragons were quite endearing. I so adored this extraordinary that is Socially Orcward! Five-plus stars!
-------------------------
Read my reviews for the Adventures in Aguillo series: