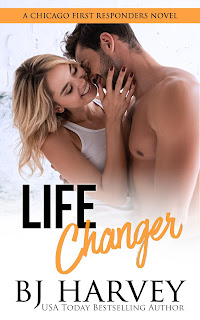 Note: An advanced reader copy (ARC) was provided by the author via Enticing Journey Book Promotions.
I've been eagerly awaiting the release of the second novel in BJ Harvey's Chicago First Responders series ever since I finished reading the series starter, Show Stopper, last year. Life Changer is a single-parent romance times two! Yep, the awesomeness couldn't be limited to just one of the main characters being a single parent. Delilah Duncan nee Baker is thirty-six, mom to eleven-year-old Harvey, divorced from her ex-husband (who also happens to be her best friend), Flynn, for two years, and a chef and restaurateur who vlogs about food in her spare time. On the other hand, Rhodes Anderson is thirty-nine, dad to sixteen-year-old Jacob, a widower (having lost his wife, Lily, to ovarian cancer five years prior), and a firefighter with the Chicago Fire Department. Online videos, a mugging, and a kinda-sorta-maybe setup by well-meaning friends and family is just the beginning of the love story of Dee and Rhodes and their awesome sons, Harvey and Jake.
There was so much to adore about this book! The fact that there wasn't a great deal of the usual drama (i.e. misunderstandings due to a lack of communication, self-sacrificing moves, jealous exes and stubborn children unwilling to accept change or moving forward, etc.) already made it a standout. There's a pinch of angst, but nothing that absolutely derails Dee and Rhodes's relationship, which I very much appreciated. I love the fact that BJ Harvey told the story her way, choosing to not take the well-worn path of other single-parent romances. There was so much heart here, sometimes causing a twinge in my chest when Lily was remembered, but more often than not, my heart thumped happily as I saw Dee and Rhodes fall madly in love, as well as have Jake become the big brother Harvey always wished for. Then there were all the supporting characters who lived up to being supportive of Dee and Rhodes. Le sigh. Five stars for Life Changer.
---------------------------
Read my reviews for the Chicago First Responders series: