Review: Lost on the Way by Isabel Jolie (West Side #4) 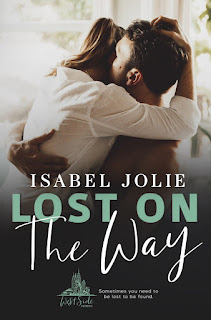 Note: An advanced reader copy (ARC) was provided by the author via Xpresso Book Tours.
Isabel Jolie is a new-to-me author, and Lost on the Way is my introduction to her writing. This book also happens to be the fourth one in the author's West Side series, a fact which I did not know about before diving into the book. I have this thing about reading books in a series in order, but safe to say I was still able to enjoy this story even without having read any of the previous ones. Although to be fair, my curiosity has been somewhat piqued and I'm considering checking out the rest of the series (my never-ending to-be-read list resembles more of a bottomless pit). But, let's focus on this latest book for now...
Lost on the Way is a friends-to-lovers story about Maggie Thompson and Jason Longevite. Their paths crossed, but that was all it was--nothing obviously life-altering, not when their attention was elsewhere. When they meet again, they become tied together by one young man who would forever remain nineteen. Adam was Maggie's first love, the boy who owned her heart and left it broken when he passed away. He was also became one of Jason's dearest friends, both of them brought together by a battle that only one of them won. When a line is crossed, will twelve years of friendship be another thing they'll lose?
This was a rather good read, one that had its fair share of angsty moments. There's A LOT of guilt weighing the main characters, Jason and Maggie, down, which leads to a great deal of push and pull between the two for a good portion of the book. My heart went out to both of them because it was clear that they had such strong feelings for each other, but goodness, sometimes, I wanted to shake these two and lock them in a room and just communicate openly and honestly. Still, I really liked this story of honoring the memory of a lost first love while fighting for the newer forever one. 4.5 stars for Lost on the Way.
Date Read: 02 October 2020
Learn more about Isabel Jolie.
Purchase Lost on the Way on Amazon | Apple Books | B&N | Kobo.