Review: Good Enough by Kelly Elliott (Meet Me in Montana #3) 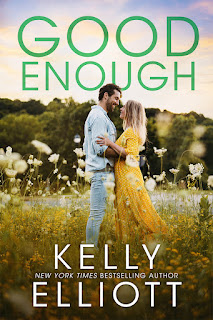 Note: An advanced reader copy (ARC) was provided by the author via Grey's Promotions.
Kelly Elliott's Meet Me in Montana series started off strong with Never Enough and followed that up with the beautifully written Always Enough. Now, with Elliott self-publishing the rest of the series--books one and two were published by Montlake--the third novel has done the near impossible by being even better, at least in my eyes, than its predecessors. Good Enough is the moving story of two people trying to find their way to a place that feels most like home and go on to find the truest sense of love and family.
When Timberlynn Holden lost her mother in a car accident, she had no idea she would lose her father as well. He may have continued to provide her with a well-to-do life, but the emotional support she needed most was gone, what with him being consumed by work. She craves for that feeling of family and home--that unconditional love and acceptance she's been missing for far too long. Surprisingly, it's not in her hometown of Atlanta, Georgia that she finds that all in--it's in the small town of Hamilton, Montana. Another surprise is the connection she shares with Tanner Shaw. Falling for him would be so easy, but trusting him with her battered and bruised heart is a risk she isn't entirely sure she's prepared. But Tanner knows what he wants and that's forever with Timberlynn. Now, he just needs to figure out how to show her she isn't just good enough--she's perfect the way she is, and together, they could have a future so worth believing in.
This third Meet Me in Montana novel could very well be my favorite so far. It's heartrending and angsty and romantic. In short, it give me all those feels plus a slew of others. I'm already familiar with Kelly Elliott's work, and not just with this series, so I was more than aware of what she's capable of, but even I marveled at how this felt like...more. It's difficult to explain, but maybe it's the combination of the story itself and how ultimately inspiring and hopeful it was and how the main characters felt like people I wanted to give hugs to and tell them to not give up because at the end of it all was everything they could have possibly wanted. Invested much? Yeah, that was basically me throughout this book. Elliott has given her readers in general and fans of this series in particular a romance novel that is more than good enough. Five stars go to Good Enough.
Release Date: 06 October 2020
Date Read: 06 October 2020
Learn more about Kelly Elliott.
Purchase Good Enough on Amazon.