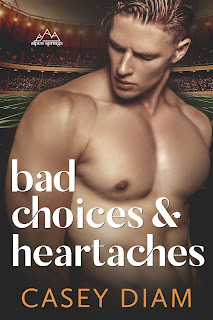 Note: An advanced reader copy (ARC) was provided by the author via Wildfire Marketing Solutions.
Casey Diam returns to her Alpen Springs series with the second novel, Bad Choices & Heartaches. I read the series starter, Can You Hear It, in August of last year, and it proved to be a good mature young adult (YA) romance while also piquing my interest regarding one of the supporting characters. Now he gets his own story, and Ryker Stanley certainly doesn't disappoint. He's paired here with Gabriella Taylor, aka Gabby, a talented snowboarder with dreams of making it all the way to the Olympics. They were once the best of friends, but perceived betrayals and hurt feelings led to the demise of their friendship. A couple of years later, Gabby realizes that she only has a small window if she wants to come clean before Ryker heads off to college on his football scholarship. But how will she admit that she hasn't hated him all this time, and can he forgive her for it?
Like the book before it, this was a good read as well. The main characters act and speak like the eighteen-year-olds that they are. There's a lot of misunderstanding and assumption-making, and with both Gabby and Ryker still barely into adulthood, there are moments where they swing between having some maturity and reverting back to a lack of it. There's quite a bit of back and forth and there are times where it's easy to become frustrated with these two, but I just have to remind myself that I was once a teenager, too. A lot of the story is spent with the two of them being apart, and there's a bit of fast-forwarding because of the distance, but I appreciated how they handle the curve ball that's thrown their way. My main point of contention, though, is the lack of resolution with Ryker's relationship with his mother and stepfather. It's like they just fade away and even his half-sister, Lily, disappears from the story. All things considered and with a pair of highly interesting main characters, Bad Choices & Heartaches was a 3.5-starred read.
Date Read: 02 October 2020
Learn more about Casey Diam.
Purchase Bad Choices & Heartaches on Amazon | Apple Books | B&N | Kobo.