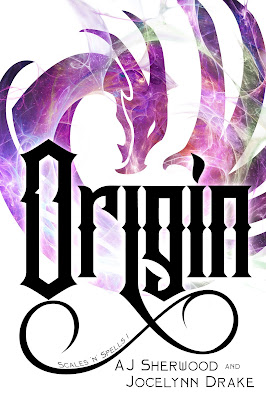 Origin
(Scales 'n' Spells #1)
by AJ Sherwood & Jocelynn Drake
Date Released: October 2, 2020
About Origin
Cameron wants to make it clear that he did not go into the festival to find a dragon mate.
Germany is supposed to be an escape. With a new mechanical engineering degree, a new job looming, and a whole life planned out that isn’t his, Germany seems like the best place to find himself.
So how does he end up discovering his lost magic heritage, running from bad guys with a secret agenda, and being adopted by the not-so-extinct Fire Dragon clan?
Cameron blames tall, dark, and sexy Alric, king of the Fire dragons. His fated mate. Because of course he is, and mates are meant to take the blame, right?
It may take a hot second, but as Cameron learns more about the scarred Alric and the life he’s landed in, Cameron realizes that perhaps this is where he’s meant to be, magic and mates and kidnapping and all.
Turns out coming to Germany wasn’t an escape but his awakening. 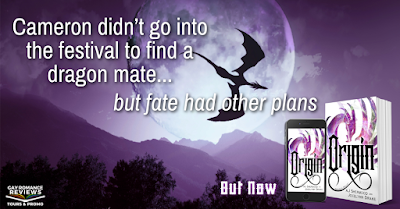 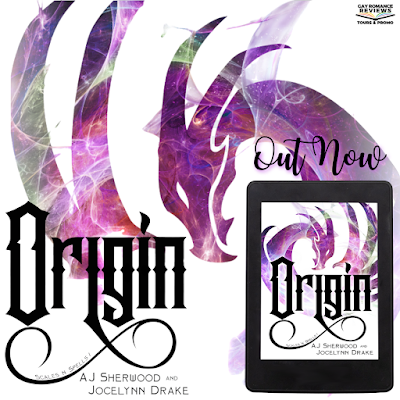 An Excerpt from Origin
It stood like a fairytale, all white and pristine as it soared into the sky, the round towers on top ending in conical tin roofs. It looked like something out of a child’s storybook, and Cameron had to blink several times to convince himself that his eyes weren’t playing tricks. “Holy shit, Alric! That’s a stunning castle. And you live in it?”
“I do indeed, along with the rest of my family. It’s a very large building so it can accommodate all of us with ease.” His expression turned sad for a moment. “More than we currently have, in fact.”
Cameron sensed there was some tragic history behind that statement. He didn’t want to pry and reopen old wounds. So he changed the topic a little to something else. “How long has the castle been standing? You said it was to replace the other one, that burned down in 1300-something.”
“You’re correct. It was built late 1300 and finished in early 1400. So, some time.”
“The upkeep on this thing must be insane.”
“Oh, I have a little help on that. Fortunately.” Alric’s mouth grew in a smile that suggested he’d just told a joke, something Cameron didn’t know enough to get. “But there’s something up here that I want to show you—oh dammit.”
Cameron’s head snapped around to see what had caused Alric to swear. For a split second, he didn’t see anything and was confused. Then he saw it, soaring through the clear blue sky, angling down and toward their direction.
A dragon. In full flight.
“I told him not to do that,” Alric sighed, already sounding resigned.
Cameron wanted to say words. Many words. He garbled on them, not able to get a single syllable out, eyes threatening to pop out of his head altogether. “Ashohjokjsdfronheeeeee—”
“Sorry, that’s Ravi. As I’m sure you’ve discovered, he’s impulsive.”
That was not the question Cameron meant to ask, but crap on a stick, that was the same guy who’d glommed onto him yesterday?! But the guy yesterday had had dark hair and a sort of Middle-Eastern look, and the dragon above his head was slate blue, and those colors didn’t really match up, and why was Cameron thinking about colors of all things when he had a dragon literally flying overhead, and wow, brain, can we focus a little here on the important things? 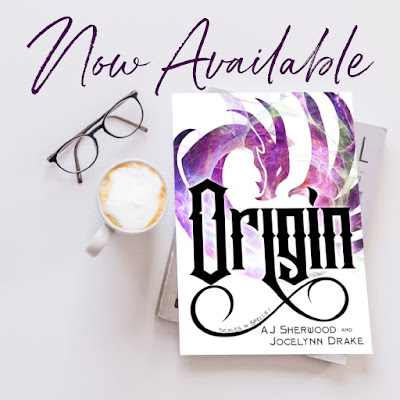 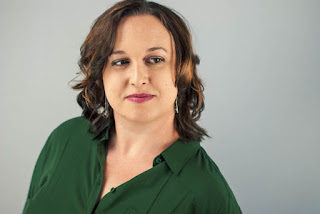 AJ Sherwood believes in happily ever afters, magic, dragons, good men, and dark chocolate. She’s often dreams at night of delectable men doing sexy things with each other. In between writing multiple books (often at the same time) she pets her cats, plays with her dogs, and attempts insane things like aerial yoga.
She currently resides in Tennessee with aforementioned cats, dogs, and her editor/best friend/sister/partner in crime. 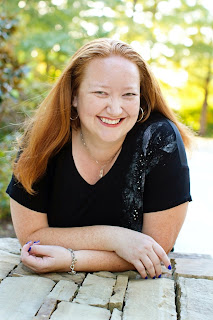 New York Times bestselling author Jocelynn Drake loves a good story, whether she is reading it or writing one of her own. Over the years, her stories have allowed her to explore space, talk to dragons, dodge bullets with assassins, hang with vampires, and fall in love again and again.
This former Kentucky girl has moved up, down, and across the U.S. with her husband. Recently, they’ve settled near the Rockies.
When she is not hammering away at her keyboard or curled up with a book, she can be found cuddling her cat Demona, walking her dog Ace, or playing video games. She loves Bruce Wayne, Ezio Auditore, travel, tattoos, explosions, and fast cars.
She is the author of the urban fantasy series The Dark Days and the Asylum Tales. She has just completed a gay romantic suspense series called The Exit Strategy about two assassins falling in love and trying to create a life together. Her newest project returns to her vampire roots with a MM paranormal romance series Lords of Discord.
With Rinda Elliott, she is one half of the Drake & Elliott writing team and has produced such series as Unbreakable Bonds, Ward Security, Pineapple Grove, and Weavers Circle.
With AJ Sherwood, she is journeying into a new MM paranormal romance series called Spells 'n' Scales that launched in October 2020. 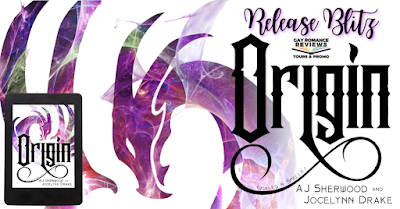