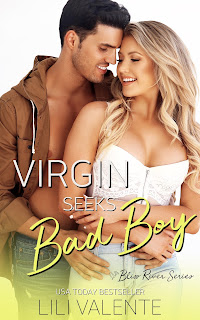 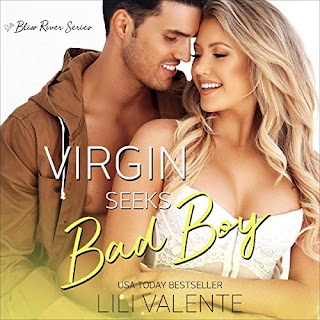 Note: An advanced reader copy (ARC) was provided by the author.
Virgin Seeks Bad Boy is the third and final book in the small town romance series Bliss River from Lili Valente. If you're familiar with the series, in particular the second book, then you'll recall that there was a spark between Melody March and Nick Geary, the former being the youngest among the March sisters featured in the series and the latter being the younger brother of Nash Geary, who is also Mel's brother-in-law, seeing as he's married to her oldest sister, Aria. Mel and Nick shared one kiss and it was the sort of kiss that left them both wanting more. But as much as Mel wished Nick would make a move on her, he's kept his distance over the past few months. Can this good girl convince the bad boy she has her heart set on to break his rules and take a chance at something more?
I wouldn't necessarily call what happened between Melody and Nick a case of insta-love considering there were months between that unforgettable first kiss and them doing anything even close to that later on. What I will say is that once they decide to act on their attraction, everything progresses rather quickly. Because Mel is the sort who believes in love and romance and happily-ever-afters and Nick has a reputation for being commitment-phobic, there's some understandable skepticism from certain people around them--aka their families--but I liked seeing these two hurdle the obstacles that were set before them. As always, Lili Valente has penned an entertaining and endearing romance, although for the audiobook, she's paired with a new-to-me narrator, Connor Crais, and I was curious to see, well, to listen to how they would click together. Thankfully, Crais matched Valente quite nicely. I'm giving Virgin Seeks Bad Boy four stars out of five stars.
Release Date: 02 October 2020
Date Read and Listened to: 02 October 2020
Learn more about Lili Valente.
Learn more about Lili Valente & Connor Crais.
Purchase Virgin Seeks Bad Boy on Amazon and Audible.