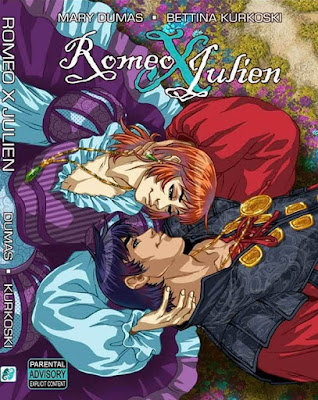 Romeo X Julien
by Mary Dumas & Bettina Kurkoski
Date Released: August 1, 2020
Just Yaoi
About Romeo X Julien
Romeo Montague has always been a little awkward. His cousin, Benny, doesn’t help, often tossing him into situations unprepared; like dragging him to a Renaissance Faire in the middle of Wine Country.
Julien Capulet, a respected festival promoter, has his own quirks. While dealing with his crazy parents and goofy gay uncles, he holds out hope of meeting the one who’ll see past all the frills.
Romeo X Julien is a sexy homage to Will Shakespeare, with more comedy than tragedy. Entertaining and tender, it shows how the course of true love may never be smooth, and that the LGBTQ community has come a long way in a short time. 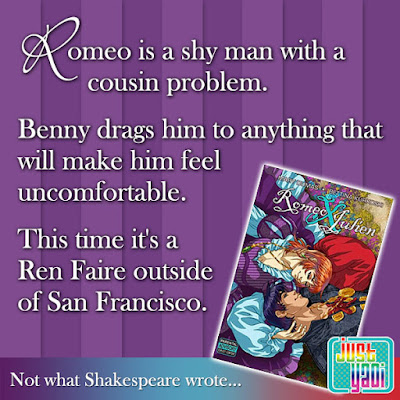 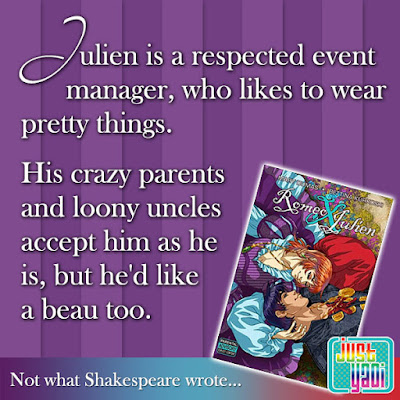 About Mary Dumas & Bettina Kurkoski
Co-creators, Mary Dumas and Bettina Kurkoski, have been fixtures on the Comic Con circuit since 2003. Mary was on staff for a number of convention groups, while Bettina was the artist in residence for those organizations.
In 2015, this friendship became a partnership in creating the comic series, Romeo X Julien. Following this comic creation lead them to Artists Alley in many Fan Conventions for the next five years. In 2019, with the finish of the story, they decided to give the comics a bright new life in full color as a graphic novel.
Connect with Mary & Bettina
Facebook