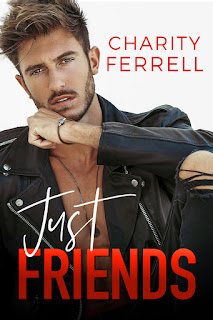 Just Friends is the sixth and latest novel in Charity Ferrell's Blue Beech series, and if the title hasn't clued you in, this is a friends-to-lovers romance. Like the books before it, this stands well enough as a standalone, so if you're new to either the author or to the series, you can dive straight in. The book has Rex Lane and Caroline Adams as its main characters, and they have the sort of friendship that may not have made sense to a lot of people, what with them being opposites, but it was a friendship that meant the world to both of them. It was a relationship that was such a touchstone, that neither one was willing to risk doing anything that could potentially derail it, so each one remained in the friend zone, even though their feelings for one another went beyond the platonic. They already crossed the line once, but their friendship was simply something neither one could afford to lose. From teenagers to adults, Carolina knew that Rex would always be there for her, so when she needs him most, he's the one she reaches out to. However, will the dark secret that she's been keeping be the very thing that could destroy them?

This was a really great read, one that does the friends-to-lovers trope proud and it's a fantastic addition to the Blue Beech series. I loved how strong Rex and Lina's friendship was, and it was obvious that they belonged together as more than "just" friends. However, I also understood why the hesitation was there for as long as it was. Risking what mattered most to them without guarantees of what sort of future held for a "more than friends" relationship was frightening. Rex was such an amazing male main character. His devotion to Lina was of a completely different level. The man would absolutely do anything and everything for the only woman who's ever owned his heart. As far as Lina was concerned, well, she was a highly likable main character, and my heart clenched for her because she certainly deserved better--that being Rex, of course. Readers who are familiar with the series will be happy to note that characters from the previous books make appearances as well, and we get to see where they all are in their respective lives, so that's an extra bonus. All in all, Just Friends was a book that left me happily satisfied. 4.5 stars. ♥