Review: Waiting for the Sun by Lindsey Iler (Hand Over My Heart #2) 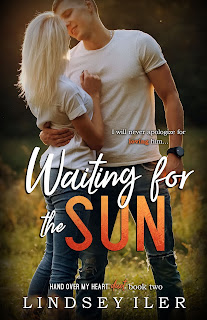 Someone hand me the tissues, damn it! Waiting for the Sun is the anticipated conclusion to Lindsey Iler's Hand Over My Heart duet, and it's as heartrending a read as I expected it to be, but it's also one that was thrumming with hope. So, do Nick Kovac and Hannah Barnes get their much deserved happily-ever-after? They do, but I won't say how nor will I say if it's the ending everyone expects it to be. Maybe that makes me an asshat, but throwing out spoilers will make me an asshat as well, so I'll go with the option that allows me to still make me people want to read the book. Also, just a quick FYI: Under a Different Sky MUST be read BEFORE Waiting for the Sun. This is a duet that follows the same couple and has a continuing story line, so please make sure you read the two books in order.

Hannah Barnes loves Nick Kovac; it's a fact of life that Hannah refuses to deny, damn all the consequences. Nick, however, is keeping his distance and refuses to have anything to do with Hannah. She's made of stronger stuff, though, and she's more than willing to fight for the love that she knows they both share. He's already broken her heart, but not enough that she's going to give up on him and leave him be. Hannah knows what she wants and needs, and if Nick were honest with himself, he knows what he wants and needs, as well. Can Hannah show him and everyone else that she's strong enough to let her love for him shine even as Nick continues to hide in the dark?

Prepare yourselves for one heck of an emotional roller coaster. Better yet, simply strap yourselves in, nicely and securely, and just hang on for the ride because it's a doozy in the emotions department. I already knew Hannah was made of stronger stuff in the first book, but it's in this second one where we see her courage and love in full force. I adored her and I wish I could have given her a comforting hug because the girl deserved it as much as she did a happy ending. Now, Nick, well, he was stubborn but I did understand where his thoughts and feelings were coming from. Let's also not forget that these two were teenagers and wishing they would act more maturely than their age isn't fair. They're supposed to learn from their mistakes, and everything Nick and Hannah were going through was part of their journey, and I'm really glad I had tissues at the ready. Five stars go to Waiting for the Sun. ♥

Read my reviews for the Hand Over My Heart series:

Under a Different Sky (book one) - five stars - My Review

Purchase Waiting for the Sun on Amazon.