Review: Under a Different Sky by Lindsey Iler (Hand Over My Heart #1) 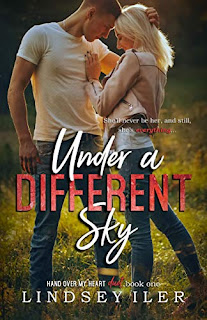 Oh, how the angst addict in me lived for this book! Gah! It was as if it took my heart and wanted to squeeze the life out of it with everything that was going on. Lindsey Iler happens to be a new-to-me author and this first novel in her Hand Over My Heart duet was one heck of an introduction. Under a Different Sky was every bit the heartrending read I'd heard it would be. Overwhelmed by the loss of his girlfriend, Nicholas Kovac is grasping at straws and barely keeping his life together. His position on the hockey team is tenuous at best, and his family and friends don't know how to help him deal with his grief nor do they agree with his chosen coping mechanisms. The only respite Nick gets is when he's with his late girlfriend's best friend, Hannah Barnes. Even when he tries to push her away, she stays, refusing to be swayed from her desire to support him and be his friend. She made a promise to her best friend, and she intends to keep her word, but how would her best friend feel if she knew Hannah was falling in love with Nick? And what happens when Nick feels the same way and when all their secrets are revealed?

My heart broke time and again for both Nick and Hannah. These two were still mourning the loss of Mia, but it was clear that Nick was drowning in the sorrow and loss and not dealing with it as well as Hannah was. That isn't to say that Hannah didn't miss Mia as much as Nick did, but it was a reminder that we all deal with grief in our own way, and some are able to handle it in a healthier manner than others. This book also tackles moving past the loss of someone and whether or not it's okay for a person to fall in love with the significant other of your late best friend or with the best friend of your late significant other, as was the case with Hannah and Nick, respectively. It was obvious that these shared a connection, but I appreciated that Nick's feelings for Mia weren't downplayed or made to look as if his love for her was less than what he felt for Hannah. They were two separate entities, but both equally life-changing for Nick. For the record, though, this first book does end on a cliffhanger. Yep, no happily-ever-after...YET. There better be one in book two after all this heartache! Gah! Five stars for Under a Different Sky. ♥

Purchase Under a Different Sky on Amazon.