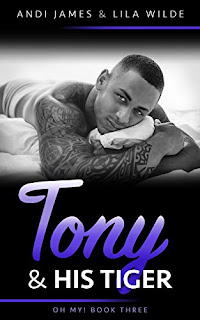 Tony & His Tiger is the third novel in the Oh My! series from the writing duo of Andi James and Lila Wilde, and it's a book I've been eagerly awaiting every since a particular former professional football player made his first appearance in the series starter, Teddy & His Bear. At thirty, Jason Manns has nothing much to complain about. He's got a great life and fortunate enough to continue reaping the rewards of his time in football. He's out and proud and his core group of friends is one he trusts. For someone like him who loves love, he would like nothing more than to have a partner to share his truest self with--and that includes his kinks...ALL his kinks. Unfortunately, Jason's been striking out when it comes to his private life, seemingly stuck in a cycle of failed connections, some of whom are only looking for some notoriety by hooking up with a gay retired NFL player. Then he notices Anthony Taylor, and while Tony isn't Jason's usual type, there's something about the bluntly honest Dominant that calls to Jason's submissive nature. Tony doesn't do bratty subs, but their chemistry is striking, so maybe a secret fling isn't such a bad thing...that is, until all the secrecy takes a toll and the risk of losing his Tiger becomes a real possibility.

This book is a far sweeter read compared to the first two--although those have their sweet moments as well--but it also has its share of heat as well as an exploration of puppy play! I adored Jason who did, indeed, have a bratty side to him (and not just exclusively while he was being submissive) but it was one I could relate to. He also had a playful and trusting nature, the latter leading to hook-ups that led to disappointment. Out of the three subs and main characters that I've met in Andi James and Lila Wilde's Oh My! series, I'd have to say Jason is my favorite (although I adore Teddy and Dylan, too!). However, Tony was a harder sell, and it took me a good, long while to warm up to the guy. Romances about opposites attracting are usually a win with me, but there was something about Tony that just didn't click right away. Maybe it was because there was a certain disconnect to him and how he kept Jason at a distance translated to me as a reader being kept at an emotional distance as well. By the end of the book, though, Tony'd won me over and he and Jason got their happy ending. Four stars go to Tony & His Tiger. ♥

Read my reviews for the Oh My! series:

Purchase Tony & His Tiger on Amazon.