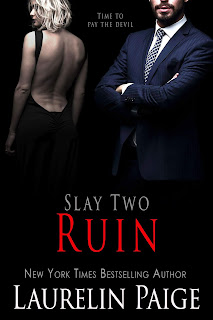 After that dumhinger of an ending Laurelin Paige left readers with in Rivalry, the first book in her Slay quartet, I wasn't sure what would be awaiting everyone in Ruin, the second book. Edward Fasbender made it plain and clear what he intended to do to Celia Werner, but if Celia thought she was prepared for what Edward had in store, she thought wrong. There is no denying her beauty, but he intends to delve deep into what lies beneath it, ugliness and all. The question is: what'll be left of Celia once Edward has broken her, and will she let him build her back up?

Goodness, but how this book had me sitting at the edge of my seat! For Edward, it wasn't enough that he make Celia bend to his demands; nope, he demanded her absolute submission and that required breaking her down--mind, body, heart, and soul. But well, Celia isn't exactly the sort of woman who easily bows down to anyone. These two have absolutely met their match in one another. They may be husband and wife now, but there was no honeymoon phase for Celia and Edward, at least not any sort of honeymoon that you'd expect from newlyweds.

This isn't a fluffy read; it's dark, and at times, not easy to read, but Laurelin Paige always makes the journey so darn worth it. Admittedly, I wasn't a fan of Celia's in the the Fixed series, but then, Edward isn't the sort of main character I got the warm and fuzzies straightaway for either, so I like that the layers are getting peeled back and we're getting to see a different side to these two. We're only two books in--with two more to go--and I, for one, am on pins and needles, eager and anxious for book three because Ruin has left me with MANY questions! Five stars. ♥

Read my reviews for the Slay series: