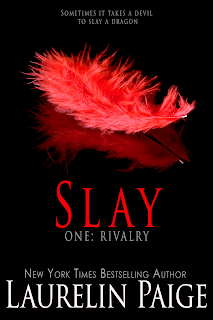 You know how anti-heroes are all the rage? Well, welcome (back) Celia Werner, thirty-one-year-old trust fund baby, only child of the owner of Werner Media, interior designer, and former friend to one Hudson Pierce. If that last name sounds familiar, it may be due to the fact that Hudson Pierce is none other than the Hudson many readers fell for in Laurelin Paige's Fixed series, and yes, Celia was a looming presence in the same series. You don't necessarily need to read the aforementioned series, but if you'd like to have a better idea of exactly why Celia was as hated as she was by fans and readers, well, get reading! I didn't hate Celia while reading the books--I may have simply had a serious dislike for her, but it's difficult to have feel anything but dislike after everything she did to Alayna Pierce née Wither. But yes, it may be possible for you to jump straight into Slay: Rivalry, if you would prefer.

On the outside, Celia Werner looks like a woman who doesn't have a single thing in the world troubling her. After all, at thirty-two she is beautiful, has a trust fund, and has her own interior design business. Lately, though, she's been feeling rather listless. She only has one client at present and while money isn't necessarily an issue, nothing she's done lately has felt fulfilling. She's lost her drive somehow. Soon, however, Edward Fasbender schedules an appointment with her and from the get-go, it isn't on her terms. Then he shocks her when he informs her isn't interested in getting any of his office spaces or residence designed. He offers her a proposal instead, and while she rejects it, she's definitely still intrigued. This is a game she can play, one that will have her turning the tables on the arrogant forty-one-year-old billionaire. It's time for the dragon to slay the devil...or will it be the other way around?

I loved getting into Celia's head and finding out what exactly makes this anti-heroine of ours tick. Her motivations were highly questionable in the Fixed series, and they're certainly somewhat disingenuous this time around. But there's more to this woman than meets the eye. She's conniving and cunning, but then so is Edward, and when these two are in each other's space, the tension is ratcheted to nearly palpable levels. I don't want to give anything away in terms of the story, but this book had me on my toes and was far from boring. And that ending? Gah! Yes, I'm frustrated, and yes, I wish the second book in this quartet were already out for me to devour with my eyes, but I also know that this is Laurelin Paige were talking about and this author has yet to disappoint (knock on wood!) when it comes to rewarding all that anticipation her readers and fans develop. I'm giving five stars to Slay: Rivalry. ♥