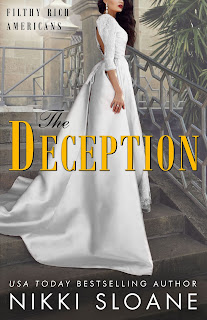 Christmas has come early for fans and readers of Nikki Sloane's Filthy Rich Americans trilogy, and it wraps up what's been both an intriguing and enticing story quite nicely. Wait, I take that back. Sloane wrapped up her trilogy with red ribbon and gold tinsel and I couldn't wait to open it all up and dive into the awesomeness that is The Deception. Marist Northcutt has experienced the kind of cut-throat games that the Hale family is capable of, and she's caught in between the father-and-son rivalry of Macalister and Royce. She knows that she needs to stay a step ahead, but she's far more prepared now than she was when all of this began. She's been lied to time and again by the Hales, and even though her heart and her body belong to Royce, in order to survive, she'll have to keep her mind focused on being the ultimate winner of this game of deception. Lies abound, but Marist is ready...

Nikki Sloane made the wait worthwhile with a series ender that had me on the edge of my seat from start to finish. I've become absolutely invested in Marist and Royce's story--although, I confess that I may be just a wee bit more invested in the former over the latter, but only because I consider her to be the main protagonist in this book and she's been through a hell of a lot! If you think you've figured everything out, Sloane managed to keep me on my toes with twists that caught me off-guard. She also took the sex and intrigue up to a higher level, and add that to her fabulous writing and anything else that was going on with Marist, Royce, Macalister, and everyone else, and you've got yourself one heck of a perfect ending to Filthy Rich Americans. Remember that you need to read the three FRA novels--The Initiation, The Obsession, and The Deception--in order! I'm giving five stars to The Deception. ♥

The Deception (book three) - five stars - My Review (posted above)