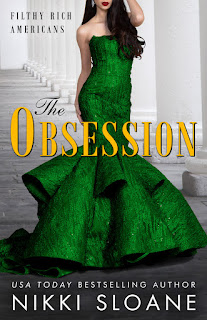 Well, well, well... If I thought The Initiation was intriguing, bestselling author Nikki Sloane took things up several notches with the second novel in her Filthy Rich Americans series. The Obsession picks up soon after where the series starter left off, and we find Marist Northcutt still reeling from what Royce Hale and his father, Macalister Hale, have just done to her. Trusting the prince of Cape Hill was clearly a mistake, and now, she's paying for it. She may have given her body and her heart to Royce, but she's learned a painful lesson--she's on her own and no one can be trusted, not even the man she's now engaged to be married to. She may have taken her eye off the prize, but after being sold for ten million dollars, Marist is fully invested in bringing down the man who broke her heart.

GAH! This book had me in knots! As in, just when I thought a knot had loosened, something would happen and then I'd get all anxious about what was unfolding right before my eyes. Marist may have been desperate in the first book--desperate enough to take the steps that she did in order to do what she needed for her family legacy--but she's far more formidable this time around. Oh, she's still desperate and not a whole lot may seem to be in her control, but after everything that's been done to her, she's refusing to sit idly by and allow the powers that be to steamroll her. After all, fool me once, shame on you; fool me twice, and you've got one wary but far wiser Marist.

Fair warning: this ends in yet another cliffhanger. I wasn't surprised by the fact that a cliffhanger was lying in wait, but this cliffhanger was truly evil, not only because I'm left hanging but because there's about a three-month wait before the third (and final!) book in the series is out! Now, before anyone out there starts berating me, the whole "evil" description is one I give select cliffhangers, and by that I mean the cliffhangers that leaving you wanting in the best way possible, and it's obvious that Nikki Sloane is an expert at that. I'm awarding The Obsession five stars. ♥

The Obsession (book two) - five stars - My Review (posted above)