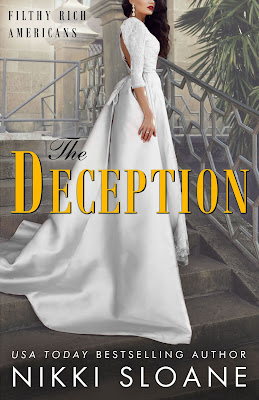 About The Deception
I’ve been through hell to get to this place. To wear the perfect white dress and stand beside Royce Hale, the liar I tried desperately not to fall in love with and failed.

Or maybe I’m still trapped in hell because the devil is here, too. He lurks at my side, plotting terrible ways to make me his.

It’s win at all costs in this family, and I know now just how far the Hales will go to get what they want.

But you can’t survive in a house full of lies without learning the art of deception, and once I become a Hale, I’ll show them exactly what I’ve mastered.


The Deception is the third and final book in the twisted Filthy Rich Americans trilogy. It should be read after The Initiation and The Obsession. 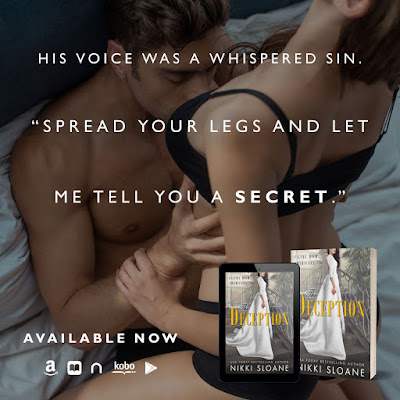 Read my five-starred review of The Deception.

Add The Deception on Goodreads. 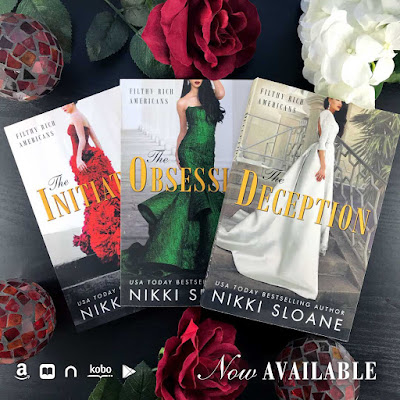 An Excerpt from The Deception
I’d make it impossible for him to avoid me. I stripped off my clothes, dropping them in a heap on his closet floor, everything except the lacy panties I wore, then pulled on the white shirt that was too big for me.

The hem barely covered my ass, and I only did up the bottom few buttons, leaving the top open so it was clear what I was and wasn’t wearing beneath it. The final piece was the green tie he’d worn the night he’d appeared in the library. I looped it around my neck and tied it loosely so the knot hung between my breasts.

Then I climbed into his big bed and waited.

Anticipation crawled up my spine. It made me hyperaware of my body and the way the silk of his tie and the soft bedding felt against my skin. It had me imagining all the different scenarios that could play out when he got home and discovered me in his bed. Would he drop everything and crawl on top of me? Would he be upset I’d come in here without his permission?

Would he punish me for it?

A sexy shiver glanced through my shoulders.

Without making a conscious decision, my fingertips crept down the front of my panties, moving to alleviate the ache. Royce had spent a lot of nights in this bed thinking about me while he touched himself, and I liked how I was now doing the same.

I swallowed thickly as my fingers glided over my clit, bringing warmth and satisfaction. My eyes fluttered closed, and I relaxed back against the pillows, settling in to enjoy myself. Not too much, though. Hopefully, he would arrive soon and finish me off.

A sigh slipped from my lips. As I rubbed faster, the sensation caused me to arch my back. I wanted to writhe with pleasure. Give myself over to it and find release, but I controlled myself. The teasing was delicious and awful.

Time passed, although I wasn’t sure how long. I wasn’t aware of anything other than the heat building inside my body and the craving for him. When I got too close, I pulled my hand away and pressed it to the mattress, gulping down air. My heart raced, sweat dampened my temples, and—

New, different awareness rolled through me. A tingle activated an alarm, and my eyes popped open to discover Royce’s blue eyes fixed on me. His expression dripped with sex and lust and want. He looked at me like I was the sexiest thing he’d ever seen.

Warmth flooded my face. He’d seen me touch myself before, but that was when we’d been in the shower and during sex. This was different. I wasn’t embarrassed, but I was surprisingly shy. Vulnerable and exposed and showing him something no one else had seen.

I was showing him the effect he had over me. Did he realize how much power he held?

His penetrative stare was a heat lamp, both exposing and lighting me up, and two words fell from his mouth in a dark command that could have easily been a growl. “Don’t stop.”

Fire ripped through me, and goosebumps burst all along my legs. 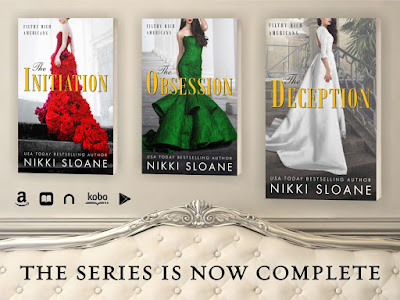