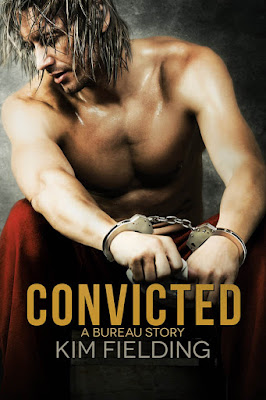 About Convicted
Vietnam veteran Kurt Powell’s addiction almost cost him everything, but a job as federal agent with the Bureau of Trans-Species Affairs helped him find sobriety and purpose. Now he tracks down dangerous paranormal creatures as well as humans who abuse their magical powers in illegal ways.

Sent from Belfast to the United States as a boy, Desmond Hughes later fell into a disastrous relationship that led to horrific murders. He’s spent seventeen years in a bleak prison with few comforts and no hope of release.

A new mission throws Kurt and Des together in a desperate attempt to prevent disaster. Sometimes what’s long been lost can still be found, but the road to redemption is never easy—and a mutual attraction may not ease the way.

Read my 4.5-starred review of Convicted.

About the Bureau series
For many years the United States government has been aware that Homo sapiens is not the only sentient species inhabiting the country. Some other species were native to the continent, while others immigrated along with humans. Early on, these nonhuman species (NHS) were largely ignored when they lived peacefully within human communities. At other times they were deemed a threat and local efforts were made to eradicate them. The federal government was not involved in these early efforts.

By the early 20th century, some local law enforcement agencies expressed frustration with their inability to deal effectively with the special needs of NHS. Localized incidents of mass violence occurred in several locations, most notably the Omaha Zombie Epidemic of 1908, the Manchester (New Hampshire) Melusine Drownings of 1911, and the Eugene (Oregon) Sasquatch Riots of 1915.

In response to these incidents, as well as a heightened desire for increased federal control, President Wilson created a new federal agency in 1919 called the Bureau of Trans-Species Affairs. The mission of this agency was to communicate with NHS, to control them, to investigate reported dangerous actions committed by them, and to bring them to justice or eliminate them when necessary. Since then, the Bureau has been quietly active throughout the United States. Its jurisdiction has expanded to include humans who engage in magical or paranormal activities.

Over the decades, a great many dramas have unfolded among the people who work for the Bureau. The Bureau stories are a collection of these tales. Each involves different protagonists and is set in a different era, yet all focus on the adventures and struggles of the Bureau’s agents. These novellas can be read in any order.

Learn more about the Bureau series on Goodreads.

An Excerpt from Convicted
1993

It was fucking cold outside.

When Desmond Hughes had been a young boy in Belfast, he used to go to the Royal Cinema to see American Westerns. John Wayne, Glenn Ford, Randolph Scott, Alan Ladd, Audie Murphy. Des had felt as if he knew those men as well as he knew his neighbors. He’d practiced their accents and spent hours running around the neighborhood with friends and siblings, pretending to be cowboys, Indians, and bandits. He’d insisted to everyone that when he grew up, he was going to move to America and buy a horse. He clearly pictured himself riding through those rugged, remote landscapes with a white Stetson on his head and a six-shooter hanging from his hips. He’d capture all the bad guys.

What he’d never once imagined—what he wouldn’t have believed if anyone had told him—was how cold the desert gets on a clear night. The air in his lungs feeling too thin to sustain him. Endless stars blinking overhead like snowflakes that never fell. And the scent of sage as brittle in his nose as thin shards of glass.

The only warmth in addition to his government-issued orange cotton jumpsuit was a thin blanket wrapped around his shoulders. The chill of the concrete seeped right through his cheap socks. Yet despite the cold, Des remained outside, pacing within the confines of his tiny exercise yard. Six strides away, four over, six back, four over. He looked up at the sky rather than at the high concrete walls or the electrified wire that topped them. He inhaled deeply, bringing in odors of the outdoors. When he was lucky, he’d catch an owl’s call or a coyote’s howl. The faint sounds always seemed as far away as the stars.

“And here you are in the American West, just as you promised.” He had frequent conversations with himself, and he hoped they staved off insanity rather than being a symptom of it. Or maybe insanity wouldn’t be so bad, especially if it were a comfortable kind. His grand-aunt Molly from Donegal, for instance, had believed herself to be a maighdean mhara—a mermaid—and had insisted on taking long baths daily so she wouldn’t dry out. Once in a while she grew upset because she couldn’t find the magic cap that would allow her to grow a tail and breathe beneath the water again, but mostly she was content. She used to sit at her open window and sing, in hopes of luring handsome men.

Des wouldn’t mind that sort of insanity if it helped him tolerate incarceration. Of course it would be difficult to be a merman here in Nevada, with the ocean so very far away. He’d have to become something else instead.

“Ah, but you’d still be a prisoner, Des. This place is full of creatures, and none of them any freer than you.”

He never saw or heard any of his fellow inmates, but he knew they were there: Monsters too dangerous to allow in public but not so threatening that the Bureau of Trans-Species Affairs needed to destroy them. And humans who, like Des, had become involved in things they shouldn’t have. Larry had told him about this prison, probably to frighten Des and keep him close. Nobody who’s locked up there ever gets out.

“Remember your first Fourth of July, Des?” He’d been only ten years old when his mother sent him away to live with distant relatives in America, virtual strangers living in a small house in suburban Chicago. Although they were strict about many things, including early bedtimes, that night they’d barbecued hamburgers and let all the kids sit on the front lawn, ready to watch the nearby fireworks. Des had been delighted to get his first look at fireflies. “And you ate so many Popsicles that you were nearly ill.” He traced fingers over his bristly cheeks and chin in recollection of the sweet stickiness that had once been there.

“I wonder what the date is now. Doesn’t matter, I suppose. I’ve even lost track of the year, and that particular Fourth was a long time ago.” He was seeing more threads of gray in his long dark-blond hair, and he supposed there were lines on his face as well.

Still circling the inside of the exercise yard, he was in the midst of recalling his first American Halloween when the light outside the doorway blinked twice. When he’d first been imprisoned, he ignored the signal and remained outside—a small attempt at independence. But a hidden guard had shot him with a tranquilizer, and hours later Des had awakened in his cell with a pounding headache. And naked, because they’d removed his clothes and blanket—as well as his mattress and books—as punishment. Many days passed before those comforts were returned, and he hadn’t been permitted outside again for… weeks? Months? He hadn’t been sure.

Abandoning his memories of the past, Des hurried through the doorway and the metal door slid closed. The lock engaged with a decisive thunk.

Kim Fielding is very pleased every time someone calls her eclectic. A Lambda Award finalist and two-time Foreword INDIE finalist, she has migrated back and forth across the western two-thirds of the United States and currently lives in California, where she long ago ran out of bookshelf space. She’s a university professor who dreams of being able to travel and write full time. She also dreams of having two daughters who fully appreciate her, a husband who isn’t obsessed with football, and a house that cleans itself. Some dreams are more easily obtained than others.