Review: Running From My Heart by Felice Stevens (Rock Bottom #3) 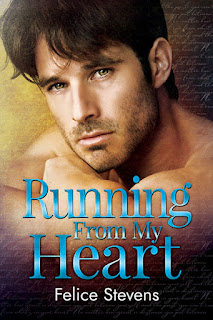 “Oh, honey. None of us do. We fall in and out of love, we fuck up, we make up, but remember this: some of us have to hit rock-bottom to appreciate the climb back up to reach the stars.”

I'm not entirely sure if the Running From My Heart is the final novel in Felice Stevens's Rock Bottom series, but if it is, then Stevens has definitely ended this trilogy with the best story in the lot--and that's saying something considering the first two books were fantastic reads. This third book is a tale of first loves and the most heartrending of losses and feelings of grief and guilt that can keep those who remain stuck, unmoving and unable to consider the myriad of possibilities if only they would open their minds and hearts to whatever may await them.

It's been six years since forty-three-year-old film director Ross Miller lost his husband, Dominic; for forty-two-year-old novelist Arden Wainwright, five years have passed since he lost his husband, Jared, and his four-year-old son, Drake. The two widowers find themselves to be unlikely neighbors renting cottages by the lake, needing time away from their New York apartments. Two different men who grieve in different ways, but as the days and weeks pass, they begin to realize they're more similar than they once thought. Will they go from running away from the memories to running towards something--and someone--they never thought they would have a chance to again?

Maybe it's because I'm in the middle of my own grieving process, but this book affected me deeply. One of the things I've been reminding myself as of late is that no one can tell when you've grieved enough. People deal with loss in their own ways, and that was one of the things that Ross and Arden's story reminded me once again. Whether it be your partner, your child, your sibling, your parent, your friend, or your pet, no one should judge you for the grief that you experience. Not everyone can fathom the depth and breadth of what your loss, and more often than not, the ones who "get" it are the ones who have experienced a similar sort of loss. This was the case with Ross and Arden. It wasn't just that they lost their husbands, but it was also how both their lives were on hold.

One of my favorite things about this book wasn't only how the author revealed what made Ross and Arden the same but she also highlighted how they were different and how they could learn something from those differences and even revel in them rather than worry about how it could push them apart. Their love story may seem "too fast" at first glance, but I guess it's a matter of perspective--six years had already gone by since Ross lost Dom and five years since Arden lost Jared and Drake. Again, just like with grief, who are we to say whether a relationship moving to the next level is too soon or not, right? This was one of those books that seriously gave me things to ponder. I paused a few times, wondering how I would feel in that situation or reflecting on my current and past personal experiences, and I love it when a book inspires me to do that. Five-plus stars for Running From My Heart. ♥

Purchase Running From My Heart on Amazon.