Review: Never Have I Ever by Lauren Blakely (Always Satisfied #3) 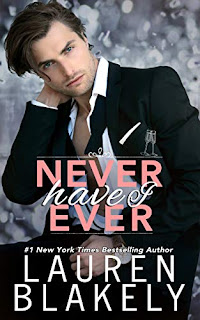 Enemies-to-lovers AND single parent romance?! Hell yes, please! Never Have I Ever was first released as an Audible Original in July, and I quite loved Jason Clarke and Amanda Ronconi's narration. Now, it's released as an eBook and in paperback, with Lauren Blakely delivering an engaging story of two people who haven't liked each other from the moment they met until a shift in their relationship leads to one hot moment in London. Meet Piper Radcliffe, a thirty-two-year-old wedding planner extraordinaire who believes in celebrating love and making the dreams of her clients come true, and Zach Nolan, a thirty-four-year-old single father and in-demand divorce lawyer who has an uncanny ability of predicting which would-be marriages will end. Her opinion of him hasn't been all that high for years and vice-versa. A few years ago, though, they end up leasing office space in the same building owned by one of their mutual friends. The fact that Zach's ten-year-old daughter, Lucy, adores his nemesis isn't lost on him nor is the fact that he's starting to see Piper in a whole new light. With their best friends engaged, Zach and Piper find themselves engaged in planning parties and events, but could they end up engaged in far less hostile activities too?

Gah! I adored this book! She's all about the hopeful beginnings of marriages and he handles the heartbreaking endings, but while Piper and Zach may have seemed like absolute opposites, they had a heck of a lot in common as well. These two were always willing to go above and beyond for their clients, and they had a genuine affection for those who were closest to them, i.e. her sister, his mother and sister, and their sets of friends, mutual and otherwise. Then there were Zach's children, ten-year-old Lucy and seven-year-old Henry, who were too cute for words and brought an added lightheartedness to the story. There's a bit of angst when it comes to the respective histories in the relationship department of the main characters, but I'm choosing to keep mum about those since nothing is mentioned in the blurb and I don't want to be the one who spoils it for those who have yet to read the book. While this may be the third full-length novel in the Always Satisfied series, you can go into this without having read the previous books (but read them anyway because they're good!). Never have I ever met a Lauren Blakely book I didn't end up falling in love with, and that holds true for Never Have I Ever, which receives five stars. ♥

Read my reviews for the Always Satisfied series:

Purchase Never Have I Ever on Amazon | Apple Books | B&N | Kobo.