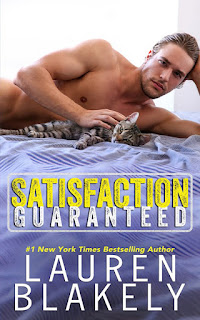 When it comes to female romance authors writing from the male perspective, there are two that have been consistently topnotch from the first book I ever read from them to the present. One is Emma Chase, and the other is, of course, Lauren Blakely, whose writing I first encountered via Big Rock more than three years ago. Now, she's back to writing a series almost exclusively from the point-of-view of the main male character. She's kicked off her Always Satisfied trilogy with Satisfaction Guaranteed, and well, this reader is well sated and purring contentedly after reading the series starter. A hot veterinarian who moonlights as a lounge singer who already let go of the girl who could have been the one seven years ago only to end up having to work with her as she manages her own animal rescue? Sounds interesting, but the clincher is that she happens to be none other than his mentor slash business partner's only daughter! Things are as complicated as ever for thirty-five-year-old Malone Goodman and twenty-nine-year-old Sloane Elizabeth, but when he learns about the Thing, he's on a quest to give her satisfaction.

This was an absolutely fun-filled read with a dash of angst and some major feels. It also made me a wee bit sad because the cover of the book has a cat that looks somewhat like my cat that passed away last week plus there were quite a few cats in the story, so yeah, I was definitely missing my Boom. But Malone and Sloane's story brought a smile to my face, thanks to the lighthearted feel and the wit and banter these two had going along with all that friendly flirting and sexual tension between them. There's a sole source of conflict that's stopping these two from truly being together and it's the same one that stopped them short seven years ago: Sloane's dad, aka Malone's business partner. But that conflict was set aside for the greater good by Dr. Goodman, who was, indeed, a good man (and veterinarian AND singer!) because every girl needs to be satisfied, if you know what I mean. Wink, wink. Satisfaction Guaranteed was a reminder of sorts that plans can change, especially when our priorities do and you don't always necessarily have to sacrifice one thing for another. You can, indeed, have it all. Five stars. ♥