Review: Falling for My Brother's Best Friend by Piper Rayne (The Baileys #4) 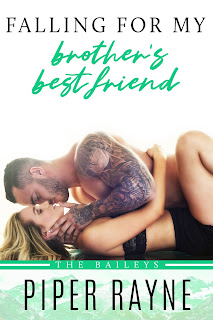 “I'm attracted to you, clearly. But the best way I can describe why I like you is to say that I see you. You've captured my attention since I was fourteen. True, back then it was probably teenage lust, but somewhere, that lust turned into more. And then when you moved in, all these emotions and feelings made me feel like I was drowning. I didn't know how to handle them. They came out as me challenging you and maybe picking on you at times. So when you ask me why I like you, it's a hard question for me to answer. It's like asking why the sun rises in the morning. It just does. It's how it was meant to be.”


Step aside, first three couples in Piper Rayne's The Baileys series; I have finally found "the one". To be honest, I was pinning my hopes on Savannah Bailey and Liam Kelly ever since Liam put his not-so-hidden talent for pushing Sav's buttons on display in the previous books. They had tension from the get-go and it was the possible kind--the sort that had me itching to unearth what as truly going on beneath the surface of the push and pull between them. And Piper Rayne certainly didn't disappoint. They didn't give me what I'd hoped for--they gave me much more, and I reaped every single reward there was to reap reading this fabulously written frenemies to lovers romance with a pinch of an older woman-younger man touch and a whole lot of falling for your sibling's best friend and vice-versa.

Twenty-six-year-old tattoo artist and tattoo studio owner Liam Kelly has had a thing for his best friends' older sister since he was fourteen. Over the years, that feeling of lust has morphed into more, not that Savannah Bailey cares or anything. She's made it abundantly clear to Liam that she doesn't plan on acting on their obviously mutual attraction to one another. Sav's already got too much on her plate, and at thirty-one, the last thing she needs is the added complication of her twin brothers' very tatted up--and very hot--best friend. However, living in his house puts them in closer quarters than they've ever been in before. Maybe seeing where their feelings will take them is a real possibility, but what hope can there be for a future when neither of them believes they're meant for forever?

I absolutely ADORED Liam and Savannah together! Yes, there were moments where I got frustrated with each of them, given how stubborn they can be at times, but goodness me, these two were inevitable. Just ask the folks in their Alaskan hometown. All they really needed was to be open to the possibility of there being a "them" and to learn to communicate better rather than make assumptions. But hey, life--and love--can be complicated, and these two needed to figure things out as individuals and as a couple. They had fears and insecurities, which shows just how good they were at masking all that with their usual confident facade. There may have been the usual meddling from Grandma Dori and Sav's siblings plus the typical gossiping from the Lake Starlight Buzz Wheel, but at least life is never boring in this quirky town! I'm giving Falling for My Brother's Best Friend five-plus stars. Next! ♥