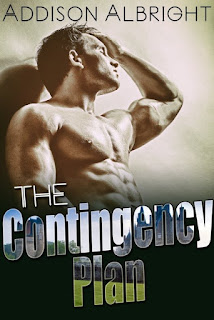 The Contingency Plan is a fantasy royal romance novella written by Addison Albright. It's the story of a young prince named Marcelo whose home is Sheburat, a place where female hierarchy reigns, making a male royal like himself not as valuable as his mother or sisters. When his twin sister passes away from an unfortunate accident, her planned wedding to Erich, the Crown Prince of Zioneven, is in limbo. The expectation is that he will choose from Marcelo's remaining younger sisters, but Marcelo and the rest of his family are taken by surprise when Erich decides he wants his former betrothed's twin brother as the replacement. Marcelo never thought the day would come for him to marry, so when Erich chooses him, he is beyond shocked at his becoming a new contingency plan.

This was a fun read, one that I commend for its originality and creative spin on the usual royal romance sub-genre. I appreciated the fact that there were no sudden or instant declarations of love from either Marcelo or Erich, although I was all for the beginnings of care and affection before the two. There was nearly no angst, which you would think would bother an angst addict like myself, but after having read my fair share of angsty books this week, turned out to be a welcome change of pace for me. The Contingency Plan easily earns four out of five stars. ♥