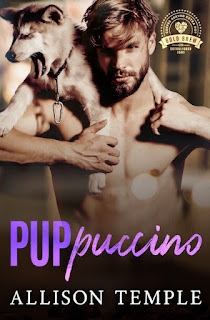 Note: An advanced reader copy (ARC) was provided by the author via Neon Rainbow Reviews.
We're now onto our second book in the multi-authored Bold Brew series, and on deck is Allison Temple's Puppuccino. No, the title has nothing to do with puppy play kink, but it does have to do with an anxious dog dad, a strong-willed husky pup, and a dog trainer (who has two dogs of his own) who understands what both this human and canine need.
Charles Beech may have gotten Athena in hopes of bringing him and his boyfriend closer, but one broken heart and lots more broken and wrecked items around the house later, he thinks it's time to call in reinforcements. Well, maybe just one bit of reinforcement: a dog trainer who gives commands that Charlie's husky--and Charlie himself--eagerly follow.
Mason Dupuis knows he can bring Athena the husky to heel, and instinct tells him that Charlie has the submissive nature that would be the perfect complement to Mason's more Dominant one. Soon, Charlie proves Mason right, and the chemistry between them is palpable, but while he may have Charlie's body, will Mason be able to have his heart, too?
This was a good read, with lots of sweet and steamy moments between Charlie and Mason. I liked seeing their relationship develop and strengthen as Charlie learned to trust his heart again. The dogs--Athena, Juniper, Dante, and Pamela--were the best kind of supporting cast. Puppuccino was a really fine addition to the Bold Brew series. Four stars.
Release Date: 04 March 2021
Date Read: 02 March 2021
Learn more about Allison Temple.