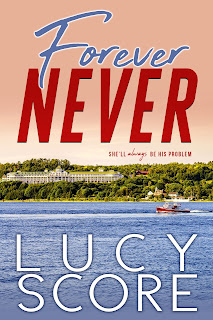 Note: An advanced reader copy (ARC) was provided by the author via Enticing Journey Book Promotions.
I went into this book blind. Yep, all it took was seeing that Lucy Score was the author, and I dove straight in. That's what happens when my past experiences with an author have left lasting positive impressions on me. Score's newest standalone, Forever Never, was quite a surprise. She delivered the romance as expected, but she also brought some suspense, thus making for an interesting and exciting read from beginning to end. It's a rather long read--taking me about four hours to finish--so maybe save it for a weekend.
Set on Michigan's Mackinac Island, which I'd first come across by way of one of my all-time favorite films, Somewhere in Time, back in 1980, readers meet Remington Honeysuckle Ford and William Eugene Callan II, aka Remi and Brick. She's a thirty-year-old artist and he's a thirty-eight-year-old cop and co-owner of a bar. He broke her heart twelve years ago, and went on to shatter it seven years after that. She's been living in Chicago for a while, so her sudden return to Mackinac has Brick paying more attention than he usually does. He's always had his reasons for keeping her at a distance, but now that he wants her closer, it's Remi who's keeping Brick--and her heart--at arm's length.
The back and forth between Remi and Brick highlighted just how much tension there was, especially given the history these two shared. There were differences in their personality, but that chemistry they had, even after Brick desperately tried time and again to not give in to his feelings for her, was difficult to deny. Admittedly, I wanted to grab Brick by the shoulders and shake some sense into him a couple of times, but I got why he felt the need to do what he did to Remi. Still, she deserved better. Lucy Score did a fab job meshing the romance and the suspense, which is why Forever Never gets 4.5 stars.
Release Date: 04 March 2021
Date Read: 04 March 2021
Learn more about Lucy Score.
Purchase Forever Never on Amazon.