Review: An Echo in the Sorrow by Hailey Turner (Soulbound #6) 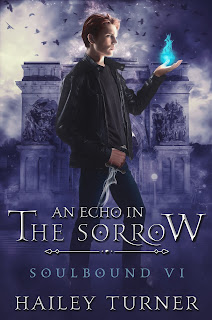 Note: An advanced reader copy (ARC) was provided by the author via A Novel Take PR.
Hailey Turner's Soulbound series is the gift that keeps on giving! Six books in and my giddy anticipation for each new installment in Patrick Collins and Jonothon de Vere's saga shows no signs of abatement. An Echo in the Sorrow is the sixth novel, and this time around, it finds Patrick in a whole heap of trouble--trouble that he knew he would have to contend with sooner or later. The time to do the right thing has come and gone, and now, it's time for Patrick to deal with the consequences. All the lies and deception have come to a head. Patrick needs to make certain choices, but not all of the decisions are his to make alone. Jono worries what this latest turn of events will cost everyone, but most especially, the one person who means most to him. When all is said and done and the past and present collide, will Patrick and Jono have any pieces left to pick up for their future?
Over the two most recent books in the Soulbound, it's almost as if Patrick finds himself taking steps backward after taking leaps and bounds forward previously. After everything he and Jono have gone through, it seems that things are about to get worse. But hey, did we really think these two were going to have it easy? Part of what makes this series such an amazing read is that there's this constant thrum of intensity that you feel as you flip from one page to the next and move on from one book to the next. Yes, there are lulls, but even those lulls aren't what I would consider sedate because there's still quite a bit going on. And while Patrick and Jono remain the headliners, the supporting characters, particularly their pack, don't even need to demand attention because they're simply that noteworthy. I can't wait for what's next! Five stars for An Echo in the Sorrow.
Date Read: 06 March 2021
Learn more about Hailey Turner.
Purchase An Echo in the Sorrow on Amazon.