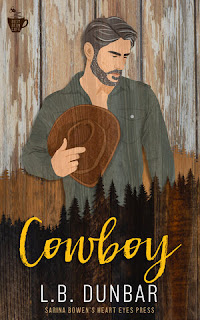 Note: An advanced reader copy (ARC) was provided by Heart Eyes Press.
L.B. Dunbar has become my go-to author when it comes to over-40 romances, so I was excited to see what she had in store for readers when it was announced that she would be one of the authors taking part in the multi-authored Busy Bean series from Heart Eyes Press. Set in the True North book universe created by Sarina Bowen, Dunbar's Cowboy is about two forty-two-year-olds, Scarlett Russell and Harland Bull Eaton III. She's a recently fired entertainment reporter who's newly separated from her cheating husband, and he's a dairy farmer working alongside his father and two younger brothers on the family-owned farm who has earned a reputation for being a perpetual proposer. When Bull approaches Scarlett at a local bar on a dare, what was supposed to be an offer of a drink becomes an invitation for a one-night stand. He thought he would never see her again, but she decides to stay in Colebury longer, only to find out she's pregnant! Will the city girl from Massachusetts and the farmer from Vermont be parenting partners or more?
I had to think about my review and rating for this book longer than usual. It's not that I didn't like the story--I did--but I guess the fact that I didn't love it like I often do L.B. Dunbar's books is what caused my hesitation. Scarlett and Bull are in their early forties, making them about five years younger than me, but oftentimes, I had to pause and double check if I made a mistake with their ages because they read much younger to me. That was due in large part to their terrible communication skills and tendency to make assumptions about one another. There was also Bull's immense lack of trust when it came to Scarlett, one part due to his past experiences with other women and one part due to who he learns she actually is. However, when Bull's uber romantic side was a sight to behold because really did take care of Scarlett and was quite devoted to her. Also, Dunbar's writing is as entertaining as it's always been, so other than frustration with the main characters and their lack of communication, I did enjoy Cowboy. It gets four stars.
Release Date: 01 March 2021
Date Read: 28 February 2021
Learn more about L.B. Dunbar.
Purchase Cowboy on Amazon | Apple Books | B&N | Kobo.