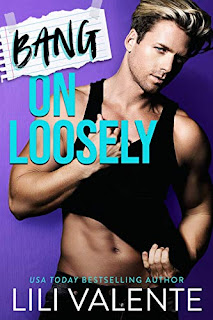 I never imagined someone like Cutter could be my perfect match, but there's no denying that i feel at home with him. I feel safe and heard and accepted for exactly who I am.And I have a sneaking suspicion he feels the same way.


Yes, yes, and YES! I already knew going into Bang On Loosely that I was going to get the laughs I've come to expect in this series, and after reading the prequel novella, Enemies with Bang-ifits, that this was going to be an enemies-to-lovers romance that has as much bite as it does bang. But what I wasn't expecting was that dash of angst that led to third and emphatic YES at the beginning. Dare I say that with every new novel Lili Valente releases in her Bangover series, the bigger a chunk of my heart is taken. Would it be too soon for me to declare this my favorite series from Valente ever? Because as much as the male main characters are rock stars, the stories in this series are more than your typical rock star romance trope. And have I mentioned that you end up falling in love with the heroines as much as you do the heroes? But I'm getting ahead of myself! Let's delve into a bit about this fab book.

Bang On Loosely is the third full-length novel in the Bangover series, and this time around, the spotlight shines on Cutter Comstock, guitarist and songwriter for Lips on Fire, and Theodora Devi, a chef dreaming to open her own restaurant. When Cutter learns that Megan Blankenship, the only girl he's ever considered having a future with, has filed for divorce, he realizes this could be his chance to be with her. All he needs is to find a fake fiancée to convince Megan that he's capable of committing and settling down, and Cutter's got his sights set on Theo to play that role. Sure, they hate each other, but that means no hearts are going to get broken. Cutter gets Megan and Theo gets her dream resto. Win-win. It's a foolproof plan...until they foolishly catch feelings and lose their hearts.

Enemies-to-lovers happens to be one of my ultimate favorite tropes, so I've read more than my fair share. Lili Valente's treatment of this trope with regards to Cutter and Theo's story happens to be one of the best I've come across in all my years of reading, and those are A LOT of years. There were no secret long-held feelings of unrequited love from our main characters, and the snark were, at times, thinly veiled barbs that were highlighted how there was no love lost between them. But as Cutter and Theo get to know each other--allowing readers to get to know them better as well--the animosity turns to begrudging affection and admiration and then more. Cutter's back story made him much easier to empathize with, which in turn, had me cheering him and Theo on towards their happily-ever-after. This book also had a pinch of suspense to it, making for an even more entertaining read overall. I highly recommend you check out Bang On Loosely, which gets five-plus stars. Read the other books, too! ♥

Read my reviews for the Bangover series:

The Bangover (book one) - five stars - My Review