Review: The Bangover by Lili Valente 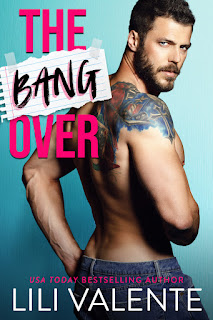 Aaand it's official! The Bangover is my favorite read from Lili Valente (so far!), and it managed to exceed any and all my expectations. This is a standalone--that I'm reeeaaally hoping is just the first in a series of books featuring the Lips on Fire guys, but more on my thoughts on that later--and what a fun read it was. We have rock star Colin Donovan and bestselling author Kirby Lawrence, both born and raised in the small town of Hidden Kill Bay, Maine and best friends since they were fourteen, with a friendship that's lasted for a decade and a half. Nine months after her long-term relationship with her dud of a private investigator boyfriend ends and just before he begins his self-imposed period of abstinence from all his usual vices--sex, alcohol, or anything else that's been stifling his creative juices--until he gets all the songs for the band written and recorded, Kirby and Colin come to a drunken agreement: to fly off to Vegas for what they dub the "Fuck Buddy Last Hoorah Sex-Cation in Vegas" plan. There's no possible way a friendship as strong as theirs could be damaged if they have sex--really hot, smoldering, unbelievably life-altering sex! Not even when an evil drone, an even more evil ex, and the most evil of cats become involved. Right?

From the second I started reading the first few words of the opening chapter, I was hooked on to all things Kirby and Colin! I loved the friendship that these two shared because it was open and honest--save for Kirby's teeny, tiny secret crush on her bestie--and it had depth to it. While the story is mostly humorous, there's a pinch of angst to it as well, courtesy of Kirby's back story, but otherwise, there are a whole lot of shenanigans that these two get into, whether intentionally or not! One of my favorite things about this book was the fact that these two didn't shy away from the fact that they happened to enjoy sex in general and that they especially couldn't get enough of each other once they jumped over that first hurdle, aka jumped each other's bones in Vegas. Yes, there's the whole ex situation to contend with, but kudos to Lili Valente for not taking the usual route, instead choosing to add a whodunit aspect to the story as well. There's A LOT to Kirby that I related to, and I loved that she was her own person and didn't require Colin's love to validate who she was but relished it once they both realized what their feelings were. I'd also like to make special mention of Murder, who reminded me of my Ollie, although I'm not sure how much that cat would appreciate being compared to a dog. And oh yes, I absolutely need more from this book world (i.e. books for Bridget and Shepherd and maybe Theodora with Cutter, please!). Five stars for The Bangover. ♥