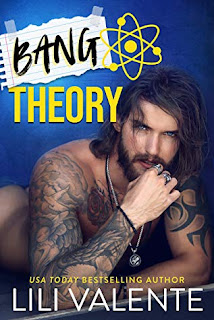 Ummm, I'm sorry, Colin Donovan, but you've been replaced as my favorite Lili Valente hero (but you're, like, my second favorite and that's better than being in last place!). Shepherd Strong, aka Shep, in all his drum-pounding, renovation-hobbying, all-around swoon-worthy glory, is now numero uno on that list of mine and for good reason. For readers of Valente's hilarous The Bangover, Shep was introduced as Colin's best friend and the drummer for their band, Lips on Fire, alongside their other friends and band mates, Cutter and Zack. Shep's story is the second in this unnamed--might I suggest Love, Laughs, and the Whole SheBANG?--series of standalones told in Bang Theory, and here, he's paired up with one of his best friends, Bridget Lawrence, who also first made her presence known in The Bangover as bestselling author Kirby Lawrence's younger sister. And yes, just like the previous book, this new one is a friends-to-lovers story, but Shep and Bridget's romance follows its own way to happily-ever-after.

Twenty-six-year-old Bridget Lawrence has the world's best sister, a great group of friends, and bed and breakfast that she's passionate about. What she doesn't have, however, is someone to share her life with. Heck, at this point, she'd be happy to have a warm body to share her bed with! She gets some much needed advice from Sir Isaac Newton and his drag alter ego (go read the book to see for yourselves!). Now, it's time to put her theory to the test, but in order to do that, she needs a...study...buddy--someone to teach her on the, erm, ins and outs of sex and seduction. She's got one guy in mind to help her out, and that's none other than the one she trusts most: her best friend--who just happens to be a rock star--Shep Strong. However, Shep is hesitant to agree to what Bridget has in mind. They already shared one kiss, and he knows that if he allows himself to do this with Bridget, their friendship would be forever altered, because how the heck is he going to hide the fact that he's in love with her?

Lili Valente set the bar high with The Bangover, and well, consider that bar met and raised with Shep and Bridget's story! Bridget was SO different from Kirby, and that isn't a bad thing because I love that they were sisters who had such a strong bond but had their own personalities and were now beginning to live lives separately. Then there was Shep. Le sigh. I swear, the guy has got to be among the top ten book boyfriends EVER. He always put Bridget first and his devotion to her would have any woman swoony. Valente deserves kudos for putting together this great cast of characters, and once one couple gets their happy ending, you're already itching to get the next book in your hands. Let me tell you, after reading Shep and Bridget's romance, the next book featuring one of the Lips on Fire members is going to have to be just as amazing of a romantic comedy read, but I have faith that Valente won't disappoint. After all, she hasn't yet! Bang Theory was a great start to my November reading, and it gets five stars. ♥