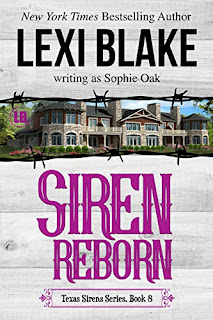 This has certainly become one of my favorite reads in the series, with a rich history between Mason and Cole and an intriguing present as they try to bridge everything that happened in order to have a future with Kitten. One of my favorite things about the books that I've read from Lexi Blake is that her female main characters have a heck of a backbone to them. Yes, many of them may start off as needing men in their lives--whether it be one or two--to help them figure out certain things, especially with as far as what's been missing, but by the end of the books, they're truly the heroines of their own stories. As always, that mix of sex, suspense, and sweetness is perfectly balanced in this novel, with Blake not skimping on any of the three. Then there are the three main characters who I can never help but want to cheer on as they get their happily-ever-after. Siren Reborn earns its all five of five stars. ♥