Review: Violets Are Not Blue by Melissa Toppen 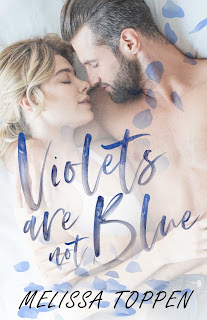 Violets Are Not Blue is the newest standalone from Melissa Toppen, and while the title says violets aren't blue, this book made me blue. I had high hopes for the book, and not just because I've enjoyed my past reads from this author. When I read the blurb, I was looking forward to reading an enemies-to-lovers slash office romance, but there was so much frustration on my end, all of it courtesy of the female main character, thirty-two-year-old Blue Daniels. She's a woman who no longer believes in love nor does she trust men in general, not after her high school sweetheart broke her heart and her last boyfriend cheated on her. She's good with hooking up because it's all just physical; she isn't interested in the emotional stuff. Now, it seems like Harris Avery sets his sights on her. He's thirty-five and gorgeous with a reputation for being the office playboy. Almost every woman in their office has fallen for his charm, but Blue refuses to be swayed. How long can she resist once he goes all in to claim her heart?

Writing reviews explaining why a book didn't work for me is not as easy as you may think, especially when it's a book written by an author whose work you've liked before. There's no denying that Harris had more going for him than being a playboy, but as good a guy as he may have been, I just couldn't get past Blue and her attitude. It's not even her being anti-love that bugged me but it was her in general. I seriously wish Harris had turned his attention towards someone--anyone!--else because Blue just wasn't doing it for me. She was so resistant for so long that the story dragged, and it felt longer than it actually was. So, as much as it pains me, Violets Are Not Blue gets 2.5 stars. ♥