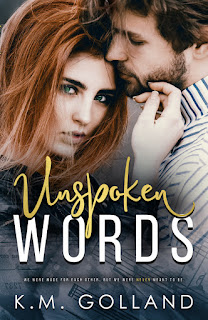 “Words mean a lot to me. You know that. They're not empty where I'm concerned. They could never be empty.”

He sucked in a deep breath and let it out slowly. “If you want those words so desperately, I'll give you words. But they'll be my words. No one else's.”

“All I've ever wanted was your words, Connor Burke.”

Oh, my poor, battered and bruised heart! K.M. Golland's latest standalone novel was heartrending, and I may have needed tissues numerous times throughout, but I refuse to say that it left my heart broken. Did my heart ache for the main characters? Yes, it did, and that heartache was a near constant, taking a break only when hope and happiness for Connor Burke and Eloise Mitchell take its place. You see, Unspoken Words isn't "just" a romance; no, this wondrously moving novel is the story of a love that surpasses time and the tests that come along the way, so that no matter what the ending may be, what readers need to remember most is the journey Connor and Ellie shared. Another thing that readers must not forget is to have tissues on hand because you're going to need them.

Connor Burke and Eloise Mitchell when they're twelve, with Connor still reeling from the loss of his best friend. Darkness looms over him, but when Ellie comes along, she serves as a beacon. Over the years, they shared many firsts, most importantly, becoming each other's first love...and later on, each other's first heartbreak. But it seems that these soul mates were destined to have their paths cross once again. Mistakes have been made, and mistakes will inevitably be made too many times to count. However, will Connor and Ellie be able to overcome everything that comes their way when the greatest challenge of all is one that neither of them could ever be able to defeat?

I have adequate enough words to explain why this book moved me as much as it did, but I feel as if it deserves more than adequate from me. My first and only read from K.M. Golland was back in 2017, and Plight had already clued me in that this author was one to watch. I admit that I've been remiss in keeping an eye out for her work, but when I read the blurb for this novel and saw her name attached to it, I knew it was time to reacquaint myself with her writing. To say that Golland has a way with words is an understatement, and the fact that she stuck to her guns and told Connor and Ellie's story the way she wanted to makes me want to give her a standing ovation. In this day and age where happy endings are a must in books, a novel like Golland's Unspoken Words is a reminder that happily-ever-afters are commonplace and stories like Connor and Ellie's tale is damn extraordinary. Five-plus stars. ♥