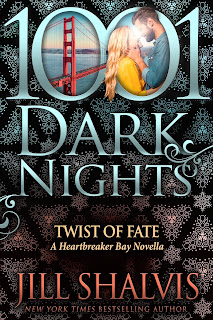 Twist of Fate is a novella that's part of Jill Shalvis's Heartbreaker Bay series as well as being part of the 1001 Dark Nights collection. This can pretty much be read apart from the previous novels and novellas from the series, so no worries if you're new to either the Heartbreaker Bay world, which is set in San Francisco, or new to the author in general. Now, I've read several of the other books from the series as well as other books penned by Shalvis, and it pains me to say this, but I wasn't a fan of this new novella, both when it came to the story or the main characters.

Diego Stone receives a call from his older brother Rocco's fiancé asking him to be Rocco's best man at the wedding and Diego finds himself leaving San Diego to return to San Francisco for the first time in ten years. He thinks he's ready to face the brother he hasn't forgiven for abandoning him all those years ago, but what he isn't quite ready for is to see Daisy Evans, who turns out to be the wedding planner and just happens to be the girl who broke his heart when she went to New York a decade ago. Is this their chance for closure or to finally get their happy ending?

Sigh. I really wanted to love this book, but the entire time I was reading it, I struggled to feel the connection between the main characters. It simply wasn't there for me, and if I'm being perfectly honest, I was far more interested in the supporting characters, aka Rocco Stone and Tyler Houston. I wanted to know what their love story was like, and because I haven't read all the previous books, I have no idea if their story was ever told, although I suspect it wasn't. So yeah, I wish I cared about Diego and Daisy more, but I simply didn't. 2.5 stars for Twist of Fate. ♥

Purchase Twist of Fate on Amazon.