Review: Stocking Stuffers by Erin McLellan (So Over the Holidays #1) 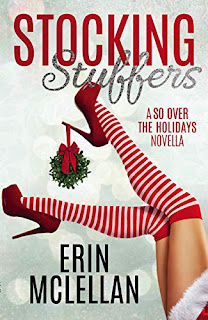 Stocking Stuffers is the first novella in Erin McLellan's new So Over the Holidays series, and we're introduced to a fun cast of characters who all find themselves stuck in a Christmas-themed bed and breakfast because of a snowstorm. Winterberry Inn is hosting the Staunchly Raunchy Book Club's Christmas party and its members are treating themselves with a bit of show and tell of potential stocking stuffers in the form of...sex toys. Showcasing the latest and greatest from Lady Robin's Intimate Implements is its marketing head, Sasha Holiday, but while she may be rocking the Christmasy costume, she's not a fan of the holiday. When a blizzard forces her to stay put, she has to suck it up and bask in--rather than barf at--all the Christmas feels. Maybe Perry Winters can be her personal distraction, and what a sweet and sexy distraction he is. But this can be nothing more than a hook-up while she's in Winterberry Inn because Sasha doesn't do relationships. Perry, on the other hand, doesn't do the one-night stand thing, but he'll take what he can get from Sasha...and maybe, in turn, Perry could help Sasha find the holiday spirit.

Well, now... Talk about heating up the holiday season! Erin McLellan has penned a really hot read and it took me less than an hour to read it, and yes, I found myself wishing this was a longer read because I wanted to see Sasha and Perry's relationship further. There were A LOT of steamy moments shared by Sasha and Perry, and while there were also some sweeter ones, I needed a wee bit more romance. That isn't to say, however, that this isn't a good read; on the contrary, McLellan put together one of the most entertaining casts of characters I've come across in a good, long while, and if you knew how much I read on a regular basis, you'll know that's a big deal. I loved that Sasha unabashedly her being a sexual creature and how she was able to get Perry to open himself up to being more sexually adventurous. I love seeing authors whose work I've enjoyed reading push themselves to be more than what's expected or to what readers have been used to, which is why I even with Stocking Stuffers not having as much romance as I would have wanted, I still enjoyed the story McLellan had to share with readers. Four stars. ♥