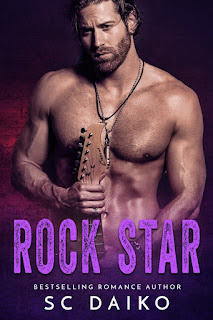 Rock Star was my introduction to SC Daiko and her writing, and color me impressed because what I read, I loved, to the point that I was thrilled when I got to the end of the book and found out this was just the first in a new series by the same title that will feature the bands ChiMera and Vanilla Sky. I know, I know. I'm getting ahead of myself. Excited, remember? Anyway, in this series starter, we meet the twenty-seven-year-old lead singer and bassist of the wildly successful rock band ChiMera, Axel Wainwright, and Phoenix Johnson, the new twenty-two-year-old back-up singer that the band signs up to join them for the continuation of their current after it was put on hold following the death of Axel's sister and back-up singer. Their voices together are pure magic and the chemistry between them is scorching hot, but Axel and the rest of the band have always had a rule about not sleeping with anyone they work with, which means he needs to stay away from Phoenix. But a connection like theirs can only be resisted for so long; when they give in, will everything they've each worked hard for end up burned to the ground?

I quite enjoyed getting to know the cast of characters in this book, particularly, of course, the main characters, Axel and Phoenix. These two simply had "it", meaning they had that indescribable something that made it difficult to pay attention to anything or anyone else but them. I loved that their feelings for one another was simple yet complex at the same time. Basically, they shared intense feelings that were easy enough to decipher, but with those feelings came a host of complications that would test just how strong the foundation of their relationship was and if what they had would last in the long run or not. This book had the sweet and the steamy as well as some humor and angst, but those elements were elevated thanks to the notable writing of SC Daiko. Aside from Axel and Phoenix, there were supporting characters who I seriously wouldn't mind reading more about in future books, which is why I was happy to learn that there'll be more from this world that Daiko's created in the coming new year. For now though, Rock Star is a book that's worth checking out, and I hope that you do! It gets five stars. ♥